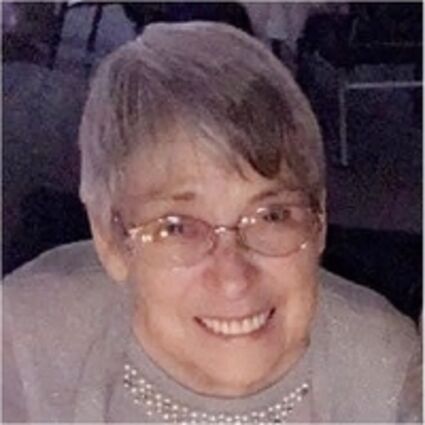 Mary Louise (Lou) Dailey, 83, passed away on Oct 18, 2021, at Lakeland Regional Medical Center. The family will hold a memorial service on Sunday, Oct. 24, at 2 PM EST at Whidden-McLean Funeral Home on 650 East Main St., Bartow, FL, with the burial immediately following at Wildwood Cemetery in Bartow.

Mary was born Sept. 20, 1938, in Fairmont, WV, to her late parents Hinton Noble and Edna Violet (Merrifield) Peirce. The youngest of eight children, she grew up in a busy household in a small town on the Monongahela River in the hills of West Virginia. When she was very young, she lost her older brother Clyde in World War II when his navy destroyer went down as part of the famous Halsey's Typhoon debacle in the Pacific Ocean. Later in life, she would occasionally mention to her children how as a little girl she remembered saying goodbye to him for the last time at the city bus stop when he left for the Navy. Mary was very active as a child and teenager, going to the Saturday matinee to watch movies (usually musicals), learning ballet, tap-dancing, getting sunburned on the garage roof while sunbathing, working at Murphy's department store in downtown Fairmont, and spending time with her neighbor and best friend, Carol Fox.

She attended Fairmont State College for a few terms then married Douglas Dailey and spent 25 years as a military wife. She raised four energetic children while moving pillar to post via Pontiac station wagon to locations such as Alaska, Georgia, Washington State and North Carolina. Her husband served multiple tours as an airborne infantryman in Vietnam, and their two youngest children were born while he was away. Mary was an excellent cook and mastered many recipes from a well-worn, Good Housekeeping Cookbook she inherited from her mother, Edna. Some of her children's favorites were her pot roast and her chipped beef on toast, which her children have been unable to duplicate to her standard despite repeated efforts. Mary was an avid fan of games and would enthusiastically participate in Yahtzee, Spades, Monopoly, bowling, and other family competitions - the livelier the better. Mary loved to sing and could be heard almost any day singing a Christian hymn or a popular show tune from her youth. She was a devout Christian and had to replace her bible every few years as it would get dog-eared and worn out from her constantly leafing through it and reading it. Upon moving to Bartow in 1993, Mary became a member of Bartow's First Assembly of God.

At the age of 62, she was led to work for Jerusalem Schools and Shevet-Achim ministries for over a decade, shuttling back and forth from Florida to Israel. She worked for several years at Jerusalem Schools ministry in the Palestinian City of Ramallah, on the West Bank. Afterward, she moved to Jerusalem and began working with Shevet-Achim ministries helping children and the families from Gaza, Iraq, and Syria travel to Israel for life- saving, open-heart surgeries that they could not get or afford in their home countries. Her time overseas also took her to Paris; Sofia, Bulgaria; Rhodes, Greece; Belgium; Damascus, Syria and Amman, Jordan. Upon finishing her ministry in Israel, she worked in Florida for several years as a house mother at the Women's Care Center of Bartow. In her later years,

Mary lived at Opis Highlands Lake Center in Lakeland and could often be seen leading weekly prayer groups and church services, along with participating in a myriad of recreational activities. Other residents at the center routinely stopped by Mary's room to find out 'what was going on' in the center or help her complete one of her many puzzles. It was rare to find her in her room, pre-COVID. In fact, her children had to make the rounds of her favorite places in the center to find her. The physical therapy room was one of such places where she enjoyed spending time. Mary Dailey was a resident of Bartow and Lakeland for 28 years. From the time that she was a young woman all the way up to the end of her life, people were always attracted to her due to her kindness and her sweet, happy demeanor. Whether it

was wives of other soldiers in the military neighborhoods, friends from church, women and children in the local care center, or her own children. People were drawn to her and would often seek her out for advice and comfort long after their formal association had ended.