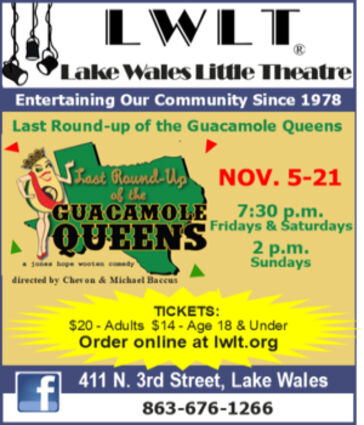 "The cast is really clicking, and their talent is nothing short of amazing," said co-director Michael Baccus. "It's fast and physical with multiple costume changes. The play is challenging, but the performers are rising to the task."

"This is one of the funniest plays we've ever produced, so we expect a full house for most performances," added co-director Chevon Baccus. "People should order their tickets and choose their seats right away."

Longtime LWLT volunteer Karen Fewell will serve as stage manager, while LWLT Board President Terry Higginbotham will handle lighting and Board Member Michael Baccus will design and run sound.

Volunteers are still needed for set building and backstage crew during the performances. Interested people can call the theatre or email [email protected]

Tickets are $20 for adults and $14 for those 18 and under. They can be purchased online at http://www.lwlt.org, by calling 863-676-1266, or visiting the theatre box office at 411 North Third Street. in Lake Wales. That location is one block east of Scenic Highway near Bok Academy North. The box office is only open between 10 a.m. and 2 p.m. on Wednesdays. The intimate theatre contains about 140 seats in raked rows, so visibility is good throughout the house.