It's Officially John A. Davenport Veterans Day in Lake Wales 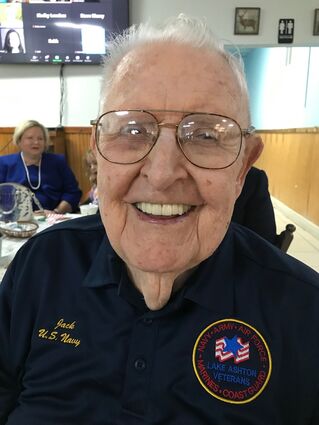 John A. Davenport, 99, is honored this Veterans' Day as a WW II Navy pilot and submarine hunter.

In an inspirational tribute to veterans in general and one man in particular, the Lake Wales Breakfast Rotary today hosted a special Veterans' Day observance in honor of "Captain Jack," a 99-years old retired Navy pilot who hunted Japanese submarines in the Pacific Ocean during WW II.

The honors came thick and fast for John A. Davenport during the breakfast meeting and included a Special Presidential Citation presented by envoy Mike Rodriguez, representing President Joe Biden. That presentation included a large silver cup, a bottle of sparkling wine, and lots of praise. Rodriguez, who is also a professor of political history at George Washington University, flew home to Lake Wales for the event.

Mayor Eugene Fultz, a veteran of both Navy and Army, presented a proclamation declaring the day "John A. Davenport Day in Lake Wales" and included a rare "key to the city" in that proclamation. Davenport, a Lake Wales resident, seemed surprised at the amount of attention his program had generated. "I'm flabbergasted," he said, when he was finally allowed to rise for his presentation.

In his concise remarks Davenport told of his own experiences that led him to combat, including the years of training following his enlistment in 1942, which included carrier flight training in Lake Michigan from converted vessels, remarking that there are quite a few aircraft on the bottom of the big lake.

His wartime service included the Battle of the Coral Sea where he flew in anti-submarine patrols. He celebrated his birthday aboard a carrier on the day that Japan surrendered.

After the war and eventual retirement as a pilot he served as a flight instructor before being assigned to the Pentagon. "It's a very big building!" he remarked. There he served as the Aviation Advisor to the Chief Information Officer. He later served as Naval Liaison to the United States Senate, in the process rubbing shoulders with numerous members of Congress and two Secretaries of Defense, Robert McNamara and Clark Clifford. 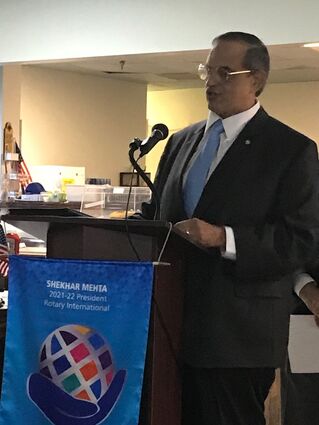 Davenport related the story of an exercise aboard a carrier off Miami where a dozen governors were expected. Half didn't show up so he invited some members of the press along on the flight. "If you've never been aboard one, it's fast, it's loud, and it's dangerous," he said. One of the aircraft involved caught on fire and flew over the carrier before ditching in the ocean. The pilot was rescued by a destroyer escort and returned to the carrier. That week the photos of the experience were on the cover of Time and Life magazines, he said, earning him some extra recognition around the Pentagon for having brought the press along.

Davenport finally retired in 1970 as his "kids were heading off to college," he said. Captain Jack and his wife recently celebrated their 30th wedding anniversary. Between them the couple raised a dozen children, and now have 27 grandchildren, 47 great-grandchildren, and nine great-great grandchildren. "When we get together there's easily a hundred of us," Davenport said.

Veteran's Day is the day Americans honor the service of their fellow citizens in defense of democracy and freedom. Included in the presentation was a table with an empty seat in honor of those who didn't return.