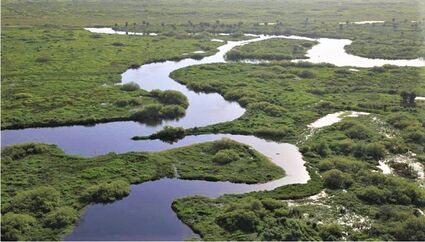 In a tribute to the very concept of restoration, a portion of Florida's Kissimmee River that was once reduced to a single canal carrying contaminated water has been approved for status as a Wild and Scenic River under legislation passed by the US Congress.

The river fell victim to a misguided flood control effort by the US Army Corps of Engineers following repeated floods after hurricanes dumped record rains across central Florida. The project turned a 103-mile meandering river and its broad marshes into a deep, 68 mile canal, draining tens of thousands of acres of wetlands. The result funneled oxygen-poor, nutrient rich water into Lake Okeechobee, creating algae blooms and fish kills in the vast lake, sixth largest in the United States.

The loss of wetlands caused the loss of a rich habitat and millions of birds including eagles, ducks and wading birds, largemouth bass, alligators, and the fish and invertebrates that sustained them.

The restoration effort came after years of lobbying by environmental scientist Richard Coleman, who finally convinced government officials of the folly of the ditch. Coleman died in an airboat accident on the river in 2003 while the restoration was underway. A small park on Lake Kissimmee was named in his honor.

The legislation, introduced by Congressman Darren Soto (FL-9) is a tribute to the tireless work of Coleman and others. Soto's district includes the headwaters of the Kissimmee River, which ultimately flows through Lake Okeechobee to feed the Everglades. Restoration consisted largely of backfilling the deep ditch and allowing the river to reflood a portion of the original marshes and floodplains.

Today the restored segment of the river, representing about a third of its original length, is again home to millions of birds, including migratory species, and forms a major rest area along the eastern flyway. It is marked as part of the Great Florida Birding Trail. The designation will apply to the portion 16 miles downstream of Lake Kissimmee and ending approximately 15 miles upstream of Lake Okeechobee.

The river carries runoff from much of the Disney World and south Orlando area, including Shingle Creek and Horse Creek.

The restoration effort, the largest such project in the world, was funded equally by the Corps of Engineers and the South Florida water Management District, which is dependent upon clean drinking water from Lake Okeechobee. It required the re-purchase of thousands of formerly-submerged acres that had been claimed by cattle ranchers after they were drained and dried. As part of the project, water levels in the Kissimmee chain of lakes that feed the river were also raised to assure seasonal flows.

The House-passed bill must now be considered by the US Senate.