Land Near Starr Lake to Be Annexed of 20-Year Horizon, Developed to City Standards 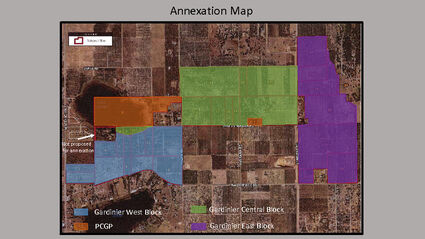 Three large tracts of land totaling more than 900 acres are to be governed by the Gardinier Master Annexation Agreement" and brought into the City of Lake Wales within 20 years. The western tract in blue will be proposed for annexation in the near future.

An unusual "annexation agreement" covering 932-acres of citrus groves owned by Sarasota-based Gardinier Florida Citrus and PCGP, LLC will be considered by the City Commission this week, yet another major block of land that is being brought under the control of city planners. The lands in question lie east of Scenic Highway and north of Masterpiece Road at Starr Lake.

Most of the property is not being targeted for quick annexation or development, but will eventually be brought forward for that purpose by the owners. The "Gardinier Master Annexation Agreement" is the result of a year of discussion, according to Lake Wales Development Services Director Mark Bennett, who told the City Commission in a workshop that the agreement covers three distinct parcels.

"This land falls within the City's Utility Service Area," Bennett told Commissioners, some of whom seemed unfamiliar with the boundaries of that area, defined years ago through interlocal agreements with neighboring jurisdictions and Polk County.

At least one of the three tracts will be brought up for annexation "within ten days" of commission approval of the agreement, according to Bennett. That parcel lies adjacent to Scenic Highway and the "Bundy Tract" which has already been annexed for a proposed housing development.

The much larger central and eastern tracts may be brought in at a later date at the desire of the owners, but must be annexed within 20 years under the terms of the agreement.

City Commissioners seemed comfortable with the idea in their workshop discussion, with Commissioner Gibson remarking that the land will fall under the higher development standards being required by the City of Lake Wales, rather than the less restrictive county standards. Gibson has repeatedly advocated against urban sprawl, and used the agenda meeting to repeat his arguments against premature development. The ability to provide municipal water and sewer service are primary among the standards he advocates.

"This 85-year old commissioner won't be here" to see the project developed, Gibson said, but he hoped others would hold to the standard. "We're giving you cover" to demand higher standards, he told planning staff.

Both Gardinier Florida Citrus and PCGP, LLC are wholly-owned by Gardinier, a diverse company based in France owned by brothers Stephane, Thierry and Laurent Gardinier. Their holding company also owns the luxury hotel Domaine les Crayeres in Champagne, France, and the famous wine chateau of Phelan Segur in the St Estephe Cru Bourgeois. They also own the Taillevent group, another high-end business which in turn owns the luxury Paris hotel Taillevent at the Arc de Triomphe, the L'Angle du Faubourg restaurant, and the wine merchant Caves Taillevent.

The Gardinier family has owned the Lake Wales tract since September 2009, growing a variety of citrus under their wholly-owned subsidiary based in Sarasota. Their website states that they produce "200,000 boxes of fruit or 1.2 million gallons of orange juice" annually in their Lake Wales groves.