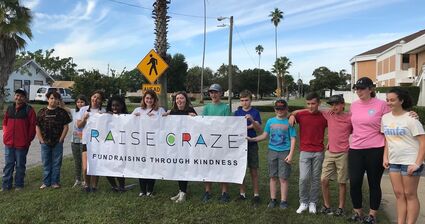 Bok Academy South students turned out in force Saturday morning to add their contribution to a city-wide effort to recreate a historic landscape plan for Lake Wales.

Led by educator Nicole Sealey, students and a few parents helped to clear grass and re-bank "wells" around each of thirty young trees planted last month along Fourth Street. Many of the young trees showed fresh growth, and a few were surprising project leaders by showing signs of going into bloom.

The plantings are being led by volunteers from Lake Wales Heritage, Inc., a local not-for-profit. They gathered with students in a parking lot near First Baptist Church to hear detailed instructions from Preston Troutman, one of the project leaders. The students were enthusiastic as they got down to the dirty spade work, pulling grass and shaking sand before many shaped the soil into rings using bare hands."

"I've never had a chance to do anything like this before," one student said when asked about the project. "It's fun!"

"It's really great to see these kids have a chance to get together and interact after more than a year of isolating," Sealey told LakeWalesNews.Net, pointing out one child she indicated "has been studying from home all year and hasn't had a chance to be with friends."

The bottlebrush trees were planted in early October with the help of 15 students from Lake Wales High School's Interact Club. They are the first of "thousands" slated to be planted in the multi-year project that will re-create, or in many cases establish for the first time, the 1930 designs created for city fathers by noted landscape architect Frederick Law Olmsted Jr. Olmsted's plan also included designs for many new streets around the then tiny village. The "Druid Hills" neighborhood east of Lake Wales AdventHealth Hospital was designed as part of that effort.

Sealey explained that the students are volunteering, not only to learn, but to help raise funds as part of the school's "Raise Craze" to help pay for technology needs for teachers and students, campus improvements and beautification, and fun activities for students.