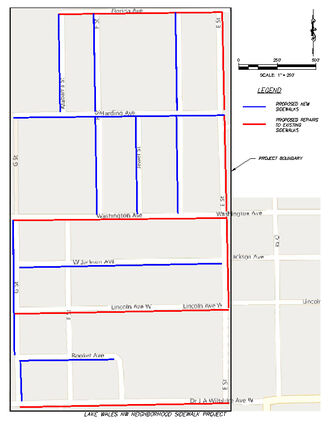 In hopes of "accelerating" the implementation of an ambitious plan for sidewalk construction and tree canopy creation in the long-neglected Northwest Neighborhood the City of Lake Wales applied November 1 for Community Development Block Grant funds. In an apparent sign of confidence, Commissioners will contemplate the hiring of the engineering firm of Chastain-Skillman, Inc. to create the construction documents.

The cost of the project is estimated to total $1,193,660, with some $153,660 to be needed for the design phase. Included in the project are, Florida, Harding, Washington, Jackson, Lincoln, Booker, JA Wiltshire, Alabama, "F", Jewell, Pearl, "E", and "G" streets, and the alley between Washington and Lincoln Avenues.

The Northwest Sidewalk and Street Tree Improvement Plan was developed as part of the extensive Lake Wales Connected plan, which also includes the reconstruction of First Street and Park Avenue.

Funds are also being set aside by the Lake Wales Community Redevelopment Agency to support the replacement of the aging Grove Manor public housing complex with a new neighborhood of mixed-income housing to include both market-rate and subsidized townhomes and single-family homes. Hopes for that project have risen as a result of the recent passage of the long-awaited infrastructure bill, to be signed into law Monday by President Biden. That will set aside a large new pool of funds to support just such efforts.

The agreement with Chastain Skillman will only come into effect if the CDBG grant is awarded. The firm was selected as top respondent in an request for proposals (RFP) advertised by the City.