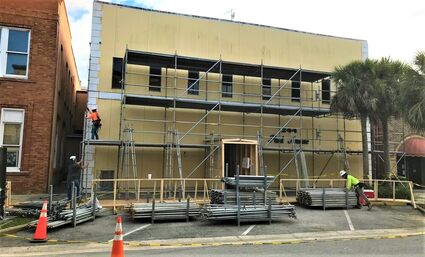 A detailed project to restore the original windowed façade to a 100-year-old building is underway as workers begin the meticulous work of chipping away hundreds of square feet of black stucco. The work is expected to reveal much of the original design of the one-time department store.

The project is being funded by local attorney Robin Gibson, who also serves as the chair of the Community Redevelopment Agency and purchased the building recently with the intent of completing the restoration.

Gibson is a staunch backer of re-invigorating the downtown commercial district, which features some two dozen historic buildings, largely representing construction which occurred during the "Great Florida Land Boom" during the 1920's. The Lake Wales Historic District presents one of the best collections of structures from that time, as the town was founded only a few years earlier and many masonry buildings were replacing the original wooden buildings during that time frame.

The structure being renovated is among the oldest in Lake Wales and was built by JT Rhodes, who also constructed the Gothic-columned Lake Wales State Bank building next door, and the two Arcades connecting Park and Stuart Avenues. The stucco front that covered the original storefront windows were part of an effort to "modernize" the building when it was converted to office space decades ago.

The initial phase of removing the stucco façade is expected to require several weeks, according to Gibson, who told the LakeWalesNews.Net that "the boards were not fastened as we had hoped, but instead were cemented to the original brick." That sort of bond presents serious problems that Gibson referred to as "a worst-case scenario," but has not deterred him from the project.

"The brick work was excellent with some nice designs," Gibson said, despite the use of a softer and less attractive brick than the adjacent bank building. If the brick cannot be uncovered without damage from the layers of adhesive stucco he plans to have the façade reconstructed in the original style using new brick.

The building was highlighted as an example of a pedestrian deterrence in the Lake Wales Connected plan developed for the CRA, which said that views into and out of buildings and visible activity help to make the area conducive to shoppers and visitors. Blank walls are seen as "blind" spaces.

The CRA is expecting see work begun on a three-block length of Park Avenue in the new year. That work will include new wider sidewalks, street pavement, lighting, street trees, benches, and other amenities to appeal to pedestrians.