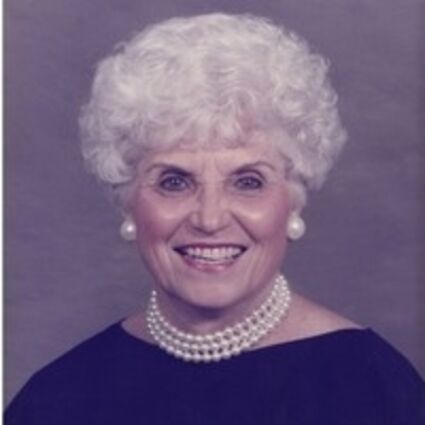 Leta Mitchell Wright, 97, retired educator, volunteer, and champion of her hometown passed away Wednesday, November 17, 2021 at her home in Fort Meade.

Mrs. Leta Wright, or "Mama Leta", as she was lovingly called by her grandchildren and numerous friends, was born in Fort Meade, Florida, on January 12, 1924 to Elbert Franklin and Belle Hendrix Mitchell. She graduated from Fort Meade High School before moving to DeLand, Florida to attend Stetson University where she earned her B.S. degree in Biology. She would later go on to earn her Master's in Business Education from the University of South Florida while working full time and raising three children, Dale, Susan and Roger.

While at Fort Meade High School she participated on the cheerleading squad and worked after school as a 'soda jerk' at the former Langston's Drug Store. At Stetson University, Leta participated in the glee club, tennis, basketball team and Zeta Tau Alpha.

Mrs. Wright spent 32 years in education. She held positions at Frostproof High School, Fort Meade High School, Denison Jr. High, Polk County School Board offices and for the last 25 years of her career, served as the D.C.T. coordinator at Winter Haven High School in Winter Haven, FL. While at Winter Haven she volunteered to be the secretary for the Blue Devil Band program, which she accompanied on numerous trips to places such as Canada and England. This nurtured a lifelong love of travel which took her all over the world as a globetrotting adventurer usually accompanied by friends, families and student groups.

Mrs. Wright was a champion for her hometown of Fort Meade and was instrumental in the early stages of growth of the Fort Meade Historical Society for which she served as President for 21 years. She advocated for the founding of a museum and was always front and center at the numerous events the society held throughout the year. She was the recipient of numerous service awards and was presented the Larry Hodge Humanitarian Award for compassionate service within the community in 2011 by the Fort Meade Chamber of Commerce.

She was the consummate Florida Gators football fan and attended football games for many years. After retirement she rarely missed a Saturday in front of the television when "her Gators" were playing.

Mrs. Wright was a lifelong member of the First Baptist Church of Fort Meade and taught numerous Sunday School classes throughout her life.

She was preceded in death by her parents, E.F. and Belle Mitchell, a brother, Lorry Wadsworth Mitchell, and a grandchild, Stuart Neely, Jr (Karissa).