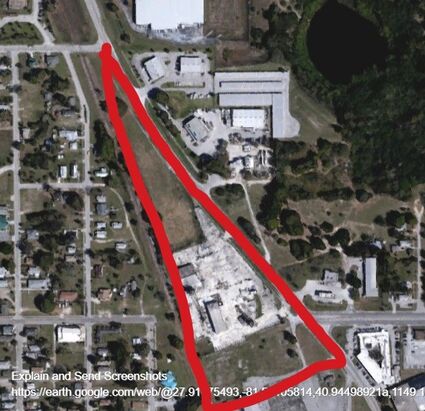 More than a quarter-mile of frontage along North Scenic Highway could be improved or redeveloped under City plans.

Funding for a clean-up effort that could pave the way for the construction of a traffic roundabout connecting Scenic Highway with Burns Avenue and Washington Avenue has been requested by the City of Lake Wales. The roundabout was recommended in the Lake Wales Connected plan, and has been included in the City's five-year Capital Improvements Plan (CIP).

The draft resolution seeks half a million dollars from the Environmental Protection Agency. It was prepared by Cardno, which is described on its website as "a global infrastructure, environmental and social development company operating in more than 100 countries and powered by a talented 4,000-strong workforce.

The document was presented to the City Commission at their November 16 meeting. If awarded, the funds would be used to remove possible contaminants from three specified sites lying north of downtown in hopes of using the land for future housing and commercial development.

The draft application documents state that "the assessment of brownfield properties is one of the first steps to implement this plan to facilitate the redevelopment of the proposed sites into affordable housing, mixed use commercial properties including a grocery store and fresh foods markets and (sic) walk and bike paths with recreational greenspaces."

The initial documents for the application were created by

The lands cited include about 1800 feet along North Scenic Highway both north and south of a former ready-mix concrete plant. Those properties include about 6.7 acres belonging to Florida Rock Industries, one-time owner of the plant.

Another 3.35 acres at the heart of the site belong to Argos Cement LLC, which purchased the portion of the property that contained the physical plant in 2014. The plant has not operated in many years, and lies directly at the foot of Burns Avenue, a designated "collector" road. The Lake Wales Connected plan designates the site as the future location of a landscaped roundabout which would connect Burns with Washington Avenue, and eliminate a very dangerous intersection.

An additional 2.08 acres north of that site stretching to near Florida Avenue belongs to the Lake Wales Community Redevelopment Agency. That property contained a disused fertilizer plant which the City obtained in a foreclosure action. All the properties were once served by a rail spur which has since been removed.

According to the application, the thirteen parcels may potentially contain "heavy metals, carbon compounds and nitrogen" which prevents their redevelopment, The area "is targeted for pedestrian and bicycle pathways with mixed use commercial properties to allow for a thriving downtown community experience for residents and visitors alike.," the application states.

Also included in the application are a parcel of .75 acres along the west side of the railroad between Seminole and Sessoms Avenues owned by Blue Goose, Inc, that was once used to build fiberglass boats, and a former gas station at the northeast corner of D Street and Dr. JA Wiltshire Avenue.

Encouraging redevelopment and infill of unused "brownfield" sites and vacant lands within the city is a component of the City's planning efforts. There are hopes that affordable redevelopment of such sites will aid in the creation of affordable housing and improved access to retail services for residents.