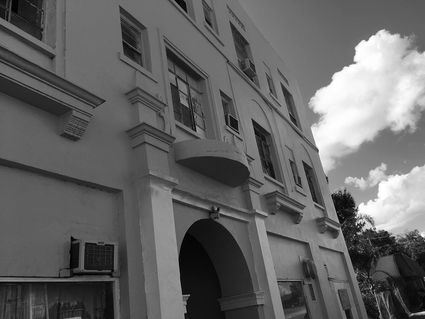 The 1929 Seminole Hotel at 207 North First Street is a minor landmark, having hosted a variety of businesses over the decades since its construction.

The City of Lake Wales will apparently acquire the Seminole Hotel as a result of a deal reached during court-ordered mediation on November 12. The terms of the settlement were discussed by the City Commission at Wednesday's workshop meeting.

"When it becomes ours, we're going to do the cleaning up," said Commissioner Terrye Howell.

The deal will be closed with a vote next Tuesday.

The property, built in 1929, has been the target of long-running code liens that quickly amounted to hundreds of thousands of dollars after city building inspections found it unsuitable for habitation. It was then condemned, and city staff initially sought to order it demolished but were stopped after a lone bid of $700,000 for the work.

During the interim, an inspection conducted by Architect Rick Gonzales, a historic building expert, deemed the building sound and a good candidate for historically-sensitive restoration and reuse. Gonzales is a long-time member of the State of Florida Historic Preservation Board.

The lien amount convinced the former owner, the Cardiff Howell Revocable Trust, to give up control after paying $630,000 for it in 2005. It was then sold for $10,500 to Harout "Henry" Kebabjian in August of 2020. with the liens still in place and fines mounting. The city offered an agreement stating that any fines paid would be placed in escrow and returned to the owner once renovations were complete, but continued to levy fines as long as the building was not repaired. Kebabjian rejected that proposal, then hired an attorney who vigorously fought the foreclosure.

As a result of the mediated settlement the City will pay $50,000.00 in full and final settlement, $325.00 for documentary stamps on the deed; a recording fee of $23.75; and $582.50 for title insurance. It will then have free and clear title to the building, with the opportunity to seek proposals from the private sector that will see the building restored, likely for s multi-purpose uses. that would likely include residences.

The building was featured in designs for the Lake Wales Connected plan, which included renderings showing a sidewalk cafe and other public access. The structure is seen as a prominent feature of a reinvigorated downtown, second only to the long-vacant 11-story Walesbilt Hotel two blocks to the south.

"When it becomes ours, we're going to do the cleaning up," said Commissioner Terrye Howell.

It is anticipated that the City may consign the structure to the Community Redevelopment Agency, which has the ability to negotiate direct sales or private deals such as the one that transferred ownership of the 1919 school building at 3rd Street and Seminole Avenue to Lake Wales Charter Schools. It is now being remodeled to accommodate Bok Academy North middle school.