Dramatic Video of Crash as Police Cruiser, Two Other Vehicles Destroyed in Crash 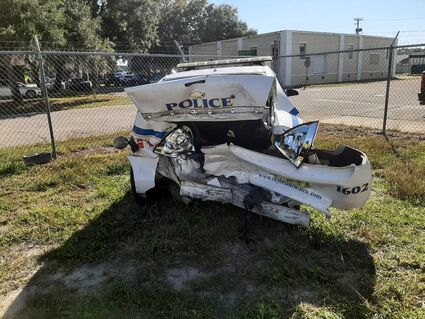 A Lake Wales Police Department vehicle was totaled in a night-time crash Tuesday evening after the officer stopped to aid a the driver of a disabled vehicle. Miraculously, no one was seriously injured in the incident, which was captured by an officer-worn body camera.

Lake Wales Officer Jacob Raines has stopped to assist a driver who had gotten a car in a ditch along US 27 just south of Chalet Suzanne Road near Eagle Ridge Mall. Police Chief Chris Velasquez noted that Officer Raines had stepped away from his vehicle only seconds earlier. "Had Officer Raines still been standing in front of his patrol car at the time of the crash, this story would have ended much differently," Velasquez said.

It was parked in a defensive position with emergency lights activated when it was struck just before 9:00.

After striking the patrol car and sending it spinning in the highway, the vehicle continued forward, eventually striking the disabled car as well, pushing it into bystanders and knocking one man to the ground. It narrowly missed striking a third vehicle that had stopped in assistance, which could have be disastrous due to the position of the bystanders.

Velasquez shared the video with City Commissioners at Wednesday's agenda review meeting along with an urgent appeal that the Commission approve the immediate purchase of a replacement vehicle. The Commission is expected to take action on the request at their regular meeting on Tuesday. Velasquez cited the video as further proof of the value of body-worn cameras.