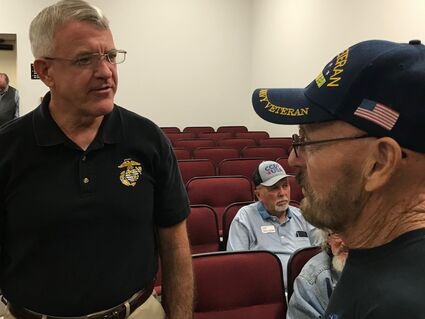 It's not easy to surprise a United States Marine. Even more so when that individual is a Major General who had a highly decorated military career. Yet that is exactly what happened Tuesday evening in Lake Wales as Mayor Eugene Fultz read a proclamation declaring General James S. "Hammer" Hartsell Day in Lake Wales.

Hartsell, recently named the director of the Florida Department of Veterans Affairs, was born in Lake Wales, and spent his youthful years living on Morningside Drive, where he recalled the citrus groves behind his boyhood home. Hartsell's father, Horace Hartsell, served as an eighth grade English teacher here.

Hartsell eventually joined the Marine Corps, where he spent 37 years, including two tours of duty in the Middle East. He eventually served as Commanding General of the 4th Marine Division, comprised of 18,000 Sailors and Marines in 37 states. He later worked as Director of the Department of Defense Asia Pacific Center for Security Studies and as an assistant to the Undersecretary of Defense for the Indo-Pacific theatre.

Hartsell's surprise was obvious as he accepted the honor, arranged surreptitiously by a group of local veterans. In his remarks after receiving the award, presented at the opening of the City Commission meeting, Hartsell addressed the burning question of how he had gotten his nickname, describing his struggles shooting in boot camp after following his Drill Instructor's order to shoot right handed even though he had always fired from his left side. After flunking the test two days in a row, he was finally tested and proven to be left-eye dominant. He switched, and for three days "hammered" the target, earning a sharpshooter rating.