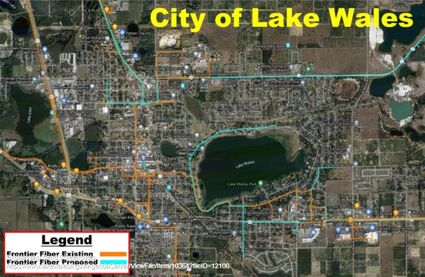 Map shows where new feeder and distribution lines will be placed around the city, which will allow the connection of direct fiber optics to each residence. This is only the first phase of the project, which will eventually be extended southward toward Crooked Lake communities.

In a long-awaited development, Lake Wales is slated to begin receiving direct fiber-optics residential Internet service beginning in 2022. Fiber optics uses light rather than electrical impulses to transmit data, resulting in much faster speeds and higher data volumes. The new infrastructure is expected to provide an economic boost to the city as more people seek to work from home.

A multi-million-dollar investment by Frontier Communications will employ "a small army of technicians" who will appear on city streets beginning "in the first quarter," according to engineer Dan Collins of Frontier, who spoke to the City Commission this week. They will begin work trenching and boring to install the all-underground fiber cables and other equipment that will offer connection speeds up to a full gigabyte per second.

Fiber optic Internet service will offer faster data transfers at lower costs, according to Collins. The service is also "symmetrical," meaning that upload and download speeds will match. The service has previously been available only to commercial customers in the area. "Other communities pay big money to get service," Collins said. "This goes to residential customers."

Copper is influenced by weather and water, as well as electro-magnetic interference, Collins told commissioners, while fiber is immune to such problems. The new service is being provided solely at the expense of Frontier as an investment. "We see the growth that is coming and want to be prepared," he said. The City of Lake Wales will pay nothing for the project.

Service will be available at speeds of 500 megabytes and a full gigabyte, for prices starting at about $50 a month with no contract required. This will allow customers to stream television, upload or download large files, and use multiple devices in the home without competing with neighbors attempting to do the same thing.

Collins asked the commission and city staff to be prepared for an expected onslaught of permit applications for installing the system, which will be placed in city rights-of-way. "We expect questions as we start digging up people's grass" on rights-of-way, Collins said, but "we will restore everything to one hundred percent or better," he promised. 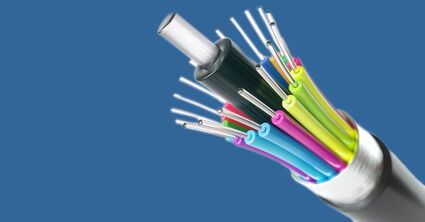 Fiber optics uses light rather than electrical impulses to transmit data, resulting in much faster speeds and higher data volumes

"This will also raise property values," Earl Dowdy told LakeWalesNews.Net in response to an inquiry. Dowdy, a graduate of Lake Wales High School, works for Frontier and is involved in the project. Frontier is the successor to GTE and Verizon.

City Manager James Slaton heralded the announcement as "a really big deal." He credited the city's significant growth as catalyst for the announcement. In response to commissioner questions, Collins explained that future plans will carry the fiber network south along Scenic Highway to Highland Park and eventually the Babson Park and Hillcrest Heights communities.