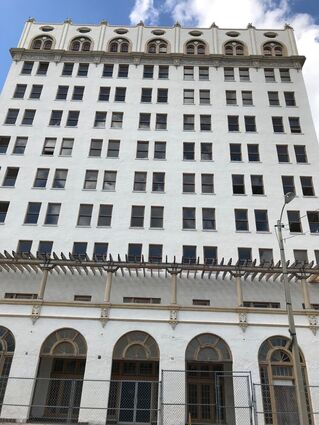 A Walesbilt redevelopment inched closer with a "productive" meeting between city representatives and a development team on Tuesday.

A proposed multi-million dollar rehabilitation and redevelopment of the eleven-story Walesbilt Hotel in downtown Lake Wales crept closer to reality Tuesday as representatives of a development team met with city officials to negotiate an agreement on the project. A second meeting is planned for Thursday. The city issued a statement on Wednesday evening characterizing the initial meeting as "productive."

The design for the project created by Architect Rick Gonzalez include the redevelopment of the entire city block containing the hotel to create a conference center, parking garage, and a 17-room "Annex Hotel" in the former American Legion Building. That plan would require the relocation of the present Lake Wales Care Center thrift store, which would become a conference center. Care Center President Rob Quam indicated that the not-for-profit organization wants to be "good community neighbors," and his board would be willing to discuss the sale of that site. "We're all ears, but no one has approached us yet," he said. "We've made it clear that the door is open, on all our properties," he added.

"I just want to get it done," said Pat Cain, whose Raymond James office is located across the street form the hotel. "It's worth taking a chance. The city has opened the door to continue the negotiations, and that's a good thing,"

"It would be a great thing for downtown," said Bud Strang, president of Six-Ten Corporation, owners of the three-story Peterson Meyers Building next door. "Especially with all the other things going on," he added, in reference to the Lake Wales Connected project set to break ground this spring. That effort will see the extensive reconstruction of both Park Avenue and First Streets which front the hotel.

Negotiations will have to address not only the financial requirements of the project, but also establishing timelines for progress. An additional complexity is presented by a Florida "Statute of Repose" which will see a ten-year clock run out on February 2. That is the anniversary of the original deal granting title to owner Ray Brown. A new agreement will supersede the prior arrangement which saw the city grant Brown the title under loose terms. The city has set a January 15 deadline for striking a replacement agreement to preclude a lawsuit over the old contract.

The proposal for redevelopment was brought forward at a city commission meeting in December, and had been developing quietly until the commission placed the lawsuit item on their agenda. That move forced the developers, perhaps a bit prematurely, to share their discussions and financing arrangements.

The high-powered team of respected corporations involved in various aspects of the proposed project include Buena Vista Hospitality Group, Preferred Hotels and Resorts, and Blue Chip Capital. Buena Vista would manage both the construction phase and the future operations of the completed hotel.

The need for a parking garage may be one area where the developers' goals align themselves with those of the city. The long-term planning done for the Lake Wales Connected plan by respected urban planners Dover Kohl and Associates recognized that a parking garage would be a likely future need. Redevelopment of the hotel would advance that demand into a shorter time-frame.

Redevelopment of the hotel may be expected to create a powerful economic engine for the historic district. Estimates created by the financiers estimated that the impact would reach $100 million within four to five years. LakeWalesNews.Net will continue to follow this story as it develops.