Competitive Roommates Offer a New Twist on the Odd Couple 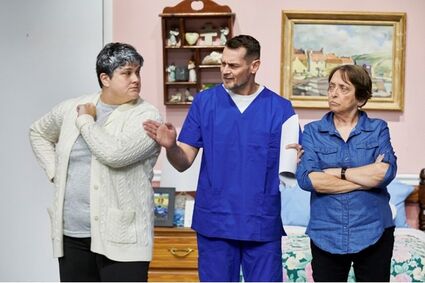 Brent Ours, as caregiver Scotty, finds himself in the difficult role of mediator between retirement home residents Abby Binder, played by Dorinda Morrison-Garrard, and her unwelcome roommate, Marilyn Dunn, played by Alicia Bush.

An evening of often hilarious one-upmanship between roommates with a dash of Halloween flair is the basis of plenty of great gags as Lake Wales Little Theater (LWLT) presents "Ripcord," a comedy by David Lindsay-Abaire about learning to live with others despite perceived differences. Set in a senior living facility, the play features some atypical competition between roommates.

Resident Abby Binder, played by Dorinda Morrison-Garrard, is a grouchy woman who seems to prefer the company of her plants. She complains about her roommate, Marilyn Dunn, played by Alicia Bush. Dunn is in return cheerful, talkative, and liked by everyone at the facility.

When another room becomes available, Abby is at first glad she will have the room to herself again, but Marilyn has no plans to move out. Her opportunity to force the matter comes when Scotty (Brent Ours), a caregiver at the facility, invites the residents to a haunted house he's acting in.

Marilyn offers Abby a bet. After first refusing, she sees it as her chance to be rid of Marilyn once and for all, and agrees on the condition that, if she loses, Marilyn must move out.

As the ladies make their best attempts to be first to win the bet, nothing is off limits. Marilyn even enlists her family Colleen, played by Nikki Buron, Derick, played by Wade Altman, and Lewis, played by Ian Elliot, to help her win. As each attempt becomes more extravagant than the next, you'll be on the edge of your seat anticipating what each of them have up their sleeves.

The performances by Morrison-Garrard and Bush are spot on for their characters and really seem like an extension of themselves. When the two argue, it seems as if they practiced living with one another. That makes the storyline feel authentic. It was also fitting that Ours' character was branching out into acting on the side while he had a “typical” day job . 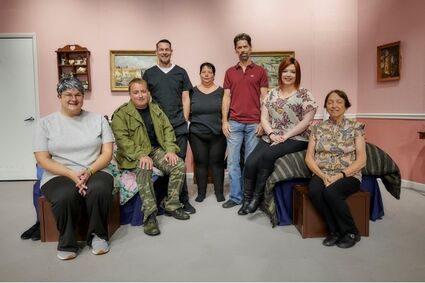 If the overall storyline isn’t funny enough to make you chuckle, you’ll certainly get a kick out of the innuendos and one-liners embedded throughout, mostly at Derick’s expense. However, comedy isn’t the only thing this story has to offer. The dramatic dialog between Morrison-Garrard and Elliot’s secondary character, Benjamin, will leave you on the verge of tears.

The play is directed by Susan Saylor Raesley and Karen Fewell, who also makes a special appearance in the show while also acting as stage manager. The performance can be seen on Fridays and Saturdays at 7:30 pm, and Sundays at 2 pm through January 30. Tickets are $20 for adults and $14 for students, and may be purchased online at any time at www. lwlt.org, or at the box office, 411 N. 3rd St., on Wednesdays between 10 am and 2 pm.