US Forest Service is in Paradigm Shift To Use Logging, Controlled Burns 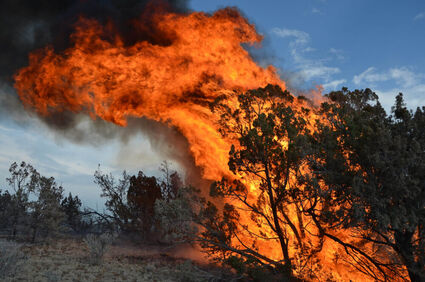 Controlled burns are a form of fire management that reduces fuel build-up and prevents crowning fires.

Editor's Note: Controlled burns and selective logging have been employed on certain Florida properties including many environmental preserves. The proven technique is now being adopted for wider use)

The Biden administration has announced that it is using $3 billion from last year's infrastructure law to revamp the federal approach to wildfire management, introducing a 10-year plan to deal with the large swaths of the West scientists consider most at risk of destructive blazes.

The Forest Service will focus on using managed fires to reduce natural fuels - flammable material that can feed fires, including trees, grasses, dead leaves and fallen branches, according to a report the U.S. Forest Service released ahead of the announcement.

In more than a century of management focused on fire suppression, forests have grown denser and fuels have built up, putting forests at greater risk of intense fires.

Carbon buildup in the atmosphere has also made matters worse by acting as natural heat traps. Climate change has reduced snow and rainfall in the West and produced hotter, drier weather, which has increased forest flammability, the report says.

"The negative impacts of today's largest wildfires far outpace the scale of efforts to protect homes, communities and natural resources," Vilsack said in a release. "Our experts expect the trend will only worsen with the effects of a changing climate."

The report calls for a "paradigm shift" in preventing fires, shifting away from fire suppression and toward a combination of logging to reduce forest density and prescribed, controlled burns.

"We need to thin western forests and return low-intensity fire to western landscapes in the form of both prescribed and natural fire, working to ensure that forest lands and communities are resilient in the face of the wildland fire that fire-adapted landscapes need," the report said.

Under the plan, the Forest Service could treat an additional 20 million acres of national forest area, plus 30 million acres of other federal, state and tribal lands over the next 10 years, according to the report.

The first two years of the plan will focus on key "firesheds," areas of 250,000 acres at risk of large-scale fires.

Planned projects to address risks in several Western firesheds, including in Arizona, Colorado and Oregon, are ready for work to begin and need only funding, according to the report.