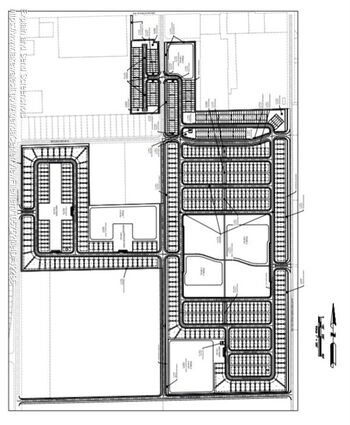 Hunt Club Grove North will feature 152 townhomes adjacent to the Orange Grove and East Lake Square shopping centers, with an additional 448 single-family homes lying to the south. Access will be from South Eleventh Street (left of image) and from both Hamlin and Tangelo Streets. A new grid of collectors and minor collector streets, plus sidewalkes, will also be constructed.

Lake Wales is slated to get its first-ever townhome project this year as the Lake Wales City Commission gave its approval to the preliminary plat for Hunt Club Grove North, a 600-unit subdivision to be built on 130 acres on the southeast side of the city. The entire project is expected to be developed in a single phase, according to City of Lake Wales Development Services staff.

All the units will be within easy walking distance of three major shopping centers, a factor that pleased both planners and City Commissioners. A network of sidewalks will also ease access for residents of adjoining developments.

"This is great," Deputy Mayor Robin Gibson commented during the commission's agenda meeting when the project was presented. "Strategic densities...mixed use, different types of housing...something for others to aspire to."

Saying the project was In perfect agreement with the city's development regulations, Gibson said that "this proposal...checks all the boxes." Gibson asked staff to identify the developer.

"His name is David Waronker," responded city planner Autumn Cochella. "You have not seen the last of him," she said, citing three other projects he's working on in Lake Wales. Waronker's CBD Real Estate Investment, LLC is based in Celebration, Florida. Waronker is known for his support of multiple charities.

Two different builders will construct the planned 152 townhomes and 448 single-family houses. Lots in the project will vary between 40 and 60-foot widths, and the project will also offer an over-sized park-like open space to serve residents. 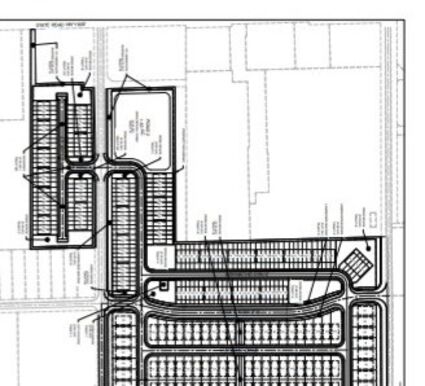 A detail view of the townhome sites depicts how they will wrap behind Winn Dixie and Rural King to Tangelo Street. A dry storm-water retention pond will buffer the development from the parking lot. SR 60 lies across the top of this image.

The townhomes will occupy lands between the Winn Dixie store and the nearby Orange Grove Shopping Center. A storm-water pond will create a buffer between the townhomes and the grocery store. Townhomes will be built in two rows on each side of Hamlin Street, wrapping behind the grocery. The developer will also extend Grove Avenue through the project to Tangelo Street. Other streets will also be improved, including the extension of Hamlin Street as a minor collector.

The western entrance to the project will be opposite the Eleventh Street entrance to Whispering Ridge. Other access will be through Hamlin and Tangelo Streets.

One city resident rose at Tuesday's Commission meeting to speak in opposition to the development, saying that low density housing of one unit per five acres is preferred. In discussion Commissioners rebutted that point of view, saying that densifying development close to the existing city protects the rolling hills of citrus, lakes, and open country that makes the area special.

The project is receiving its preliminary approval from the city, but still must be reviewed by the Florida Department of Environmental Protection due to its size.

Checking the map, it sure looks like in order to alleviate the extra traffic, the east and west sections of Grove St. should be connected. They would have to construct a railroad crossing.