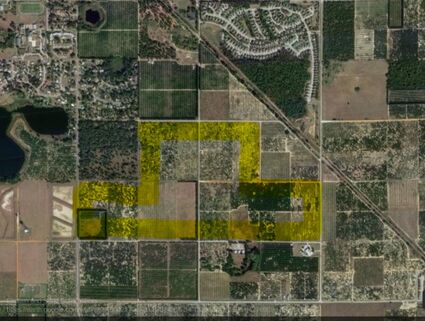 The land within the yellow boundaries are being brought into the city city limits of Lake Wales by Hunt Bros. The property extends from Scenic Highway to Eleventh Street, and lies north of Passion Play Road. Ridge Manor is visible at the top left of the photo, and Whispering Ridge at the top center. The parcel lying along Lake Belle and on the peninsula at the left of the photo is the future site of the BelleLago subdivision.

The ongoing transition of the Lake Wales area from broad tracts of citrus to new housing projects is taking another leap forward as two prominent citrus families have proposed voluntary annexations totaling some 266 acres. The tracts lie immediately north and south of the present city center. Annexation will make the sites eligible for municipal water and sewer services, allowing development at attractive densities.

The largest of the new annexation applications covers about 236.57 acres lying immediately south of the Ridge Manor neighborhood and north of Passion Play Road. It stretches from Scenic Highway through to 11th Street. The lands, which encompass 14 parcels, are owned by Hunt Bros Inc., and are almost entirely in citrus at this time. They lie between two other tracts marked for housing development on the booming south side of the city.

The second parcel of 29.94 acres is owned by the Story Family Limited Partnership LLLC, and lies to the south of Old Scenic Highway and the Duke Energy complex. It, too, is entirely in citrus, and borders upon a small water body known as Lake Caroline.

Major housing developments are already proposed for a wide swath of lands bordering the city's south and east sides. They include Bellelago, proposed for the south side of Lake Belle west of Scenic Highway, and the 600-home Hunt Club project south of the East Gate Shopping Center and east of 11th Street. In between will be a second phase of Whispering Ridge, and another recently-annexed tract just south of Belleview and the Mid-Florida Railroad.

There are presently some 20 tracts of land in various stages of development or development planning within the city limits, lying at virtually every point of the compass. Taken together they would be capable of hosting in excess of 10,000 residential units, including single-family homes, townhomes, and apartments.