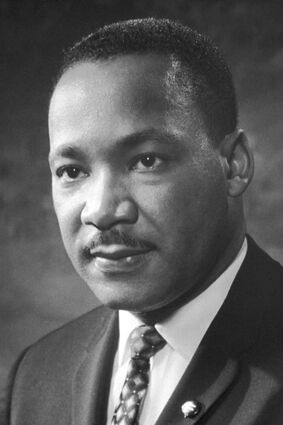 Dr. Martin Luther King Jr. was a campaigner for equal rights for all Americans. He was assassinator in 1968

A rich program was offered by the Dr, Joseph A Wiltshire Scholarship Foundation to mark the day. The program began with the 10th annual Dr. Martin Luther King Jr Legacy Breakfast. and included a showing of the landmark film "Selma" during the afternoon. The film is based on the historic 1965 march led by Dr. King which helped guarantee equal voting rights for Black people, and galvanized the Civil Rights Movement.

The breakfast program at the James P Austin Center drew a capacity audience under social distancing rules. The normal parade and festival sponsored by the Martin Luther King Jr. Committee has been cancelled due to the threat of Covid-19 during the current Omicron variant outbreak.

Congressman Darren Soto cited the need to pass voting rights legislation to defend against the erosion of access to polling places and mail-in ballots. Stressing the positive impact expected locally from the Infrastructure Bill which was recently passed by Congress and signed into law by the President, Soto stressed the "economic justice" in an economy that provides "jobs for everybody who wants to work."

Deputy Mayor Robin Gibson spoke about the Community Redevelopment Agency which he says is now correctly focused on investing back into the city. The funds raised through the tax increment are being used to pay for the Lake Wales Connected plan which promises to improve the heart of the City, with emphasis on the improvements planned for the Northwest neighborhood. "The key is the Grove Manor" public housing project, which the CRA is supporting in an effort to recreate better neighborhoods, he said.

A highlight of the program was a proclamation presented by Mayor Eugene Fultz honoring Booker Thomas Young Jr. as the founder for the first Dr. Martin Luther King Jr Parade and Festival in Lake Wales Florida. Young was a lifelong voting tights advocate.

King was a pastor and an influential civil rights leader best known for his work on racial equality and ending racial segregation in the United States. He was considered one of the greatest public speakers of his generation. HIs famous "I have a Dream" speech delivered at the National Mall is considered one of the most powerful speeches of the 20th Century.