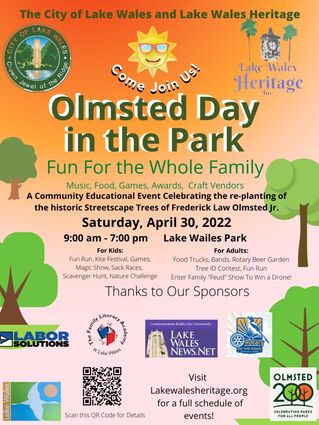 A "family fun event" this spring will recognize the legendary figure who created the city's original streetscapes, as well as Bok Tower Gardens and Mountain Lake. The all-day event will feature bands, food, games and contests, awards, plus plant and vendor sales.

"Olmsted Day in the Park" will be held April 30 in Lake Wailes Park, part of a nationwide celebration in honor of the 200th anniversary of the birth of Frederick Law Olmsted, who designed many of America's most famous parks, campuses, and cityscapes. "We want to give parents a break while we host games for the kids, and give parents a chance to compete for some outstanding prizes, too.," said Nicole Sealey, a local educator and president of Lake Wales Heritage, a host organization. "It's a great opportunity to learn about what makes our city special while having fun."

Included in the day's activities will be a "Family Feud" style contest to win a quadcopter drone. An educational booth will offer information about city history, trees, and other relevant facts, and contestants will be asked to recall the answers in the game-show style quiz to advance.

Other activities for kids will include building and flying kites, relay races, a scavenger hunt, and much more. The event will begin at 9:00 and last "until early evening," according to organizers. "We'll have games for them all day," Sealey said, and adults will have an opportunity to relax in the shade at a "beer garden" run by Rotary on the Ridge.

The festival is being hosted by the City of Lake Wales and Lake Wales Heritage, Inc., a not-for-profit group that is re-planting the original Olmsted streetscapes. Olmsted is credited with making Lake Wales "a City in a Garden" and his concepts are being used in the Lake Wales Connected plans for the city's center.

The event is an effort to educate citizens about the impressive history of Lake Wales and the people who shaped it, including both Olmsted and his protégé, William Lyman Phillips, a Lake Wales resident who gained a measure of fame in his own right.

Olmsted's first project, New York's Central Park, earned him such fame that his firm went on to create nearly a thousand such projects over about 80 years. His son, Frederick Law Olmsted Jr., designed the local projects during the 1920's after completing work on such notable locations as the Biltmore Estate near Asheville, NC, and the makeover of Washington DC. 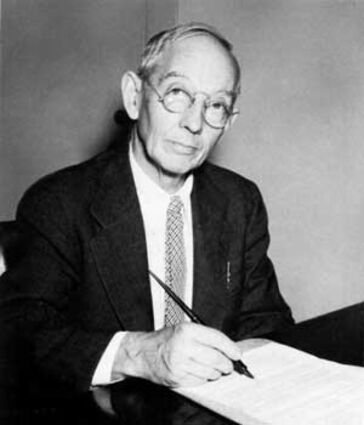 Olmsted was invited to Lake Wales by Frederick Ruth, who developed Mountain Lake. He was then hired by resident Edward Bok to design the Mountain Lake Sanctuary, home to the famous carillon tower.

Lake Wales contains the Olmsted firm's only significant work in Florida and projects here comprise the largest collection of Olmsted work in the entire million-document archive maintained by the National Association for Olmsted Parks, making the city a destination for fans and scholars of their designs.