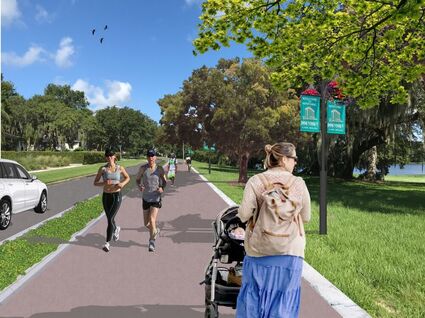 An artist's conception of the completed Park Avenue Connector Trail, which will flank the shoreline of Crystal Lake.

A multi-faceted project to transform Lake Wales' central districts will officially begin within weeks after the City Commission approved an agreement with Cobb Site Development, Inc. to perform the construction of the city's new Park Avenue Connector Trail with a $1.4 million contract on Tuesday evening.

The "Park Avenue Connector Trail" will actually utilize a portion of that right-of-way to connect the popular Lake Wailes Trail to the Library Park Trail segment, via Crystal Lake Park. That will also provide a direct connection from Lake Wailes Park to downtown dining and other resources. Construction of the 3,000 foot multi-use trail is anticipated to start this spring.

The project will divide the existing one-way pavement to create lanes for both motorized traffic and an adjacent walking and bicycle path.

"This will be a fantastic recreational asset for our entire community," said Michael Manning, assistant to City Manager James Slaton. "This is an exciting addition to the Lake Wales trail system," Manning added. "The trail will provide residents and visitors a convenient connection to the historic downtown district from one of our most frequented parks."

Construction will include the replacement of the entire street surface, creation of new parking spaces and wider driveway aprons for residents, new curbs, and the installation of new trail lighting in keeping with the two existing trails it will link. The trail crossing at Lakeshore Boulevard will be improved as well, with flashing pedestrian crossing lights and signage along with road striping. Also planned is the closure of a portion of Third Street between the library and Crystal Lake, which will become part of the trail.

The trail is part of a major effort to re-imagine and recreate Lake Wales in keeping with the founders' principles of a "Garden City." That concept was greatly expanded upon by the noted landscaper architect Frederick Law Olmstead Jr., making Lake Wales a rare southern recipient of his work. Olmsted's famous park and college campus designs are treasured assets in hundreds of American cities.

The Olmsted firm, led by Frederick Law Olmsted Sr. and his son, were responsible for New York's Central Park, Boston's 'Emerald Necklace" of parks, the Niagara Reserve, Biltmore Estate, and the re-design of Washington DC, among other famous projects. 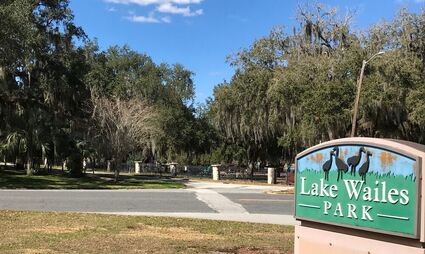 Adding trails was an identified need in the Lake Wales Connected plan created by Dover Kohl and Partners, a firm retained by Lake Wales Main Street. The award-winning plan also includes connections between the rails-to-trails segment that presently ends at Scenic Highway and Buck Moore Road, and new connections with a system running toward Bartow.

The planning for the project took in future needs as well, and included the re-location of water lines from beneath the new pavement. City staff was involved in negotiating down the cost of the trail, eliminating contractor landscaping in favor of in-house work to be led by city Horticulturist Lester Gulledge, and changing trail lighting to match the existing trails rather than more expensive standards which will be used downtown.