Mobility is a Gift for Jordan Colon 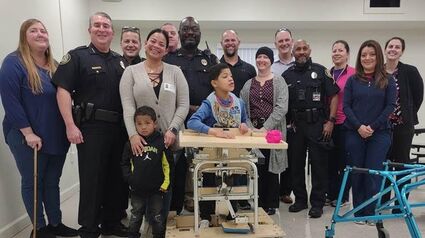 Jordan Colon, a student at Victory Ridge Academy in Lake Wales got a big surprise when City of Lake Wales police officers presented him with a Kaye Dynamic Stander, a multi-positional standing aid with 360 degrees of movement.

Colon has a developmental disability that affects his balance and postural control, making it difficult to walk unaided.

"This is something special the Police Officers Association wanted to do for Jordan," said David Black, Deputy Police Chief. "It's part of our annual Shop with A Cop program that we hold every year with children," he noted.

"This is such a bonus for Jordan," said Dr. Erika Timpe, Director of Therapy Services at Victory Ridge Academy. The base of the standing aid is equipped with a spring that activates Jordan's lower extremities and core muscles, strengthening his ability to stand in an upright position.

"As Jordan works with this adaptive device, he will be able to build muscle strength that will enable him to use a walker with adult assistance," Dr. Timpe noted.

Not only will Jordan be able to move more freely now, he will also be able to expend some stored-up energy, which is so important for adolescents, mentioned Police Chief Chis Velasquez.

The Lake Wales Police Officers Association is a non-profit organization for police officers to join voluntarily.

Victory Ridge Academy is a non-profit learning center serving students with a variety of special needs, such as Autism, Asperger Syndrome, ADHD, Cerebral Palsy, Developmental Delay, Spina Bifida, Down Syndrome and many more.