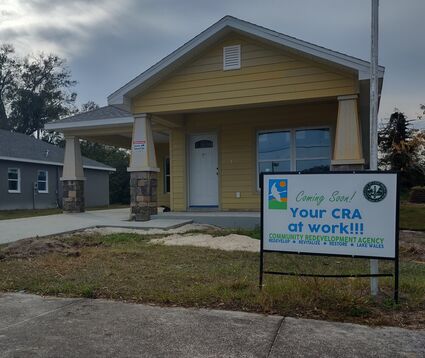 An effort by the Lake Wales Community Redevelopment Agency (CRA) to increase the availability of affordable housing through public/private partnerships is producing significant results.

The recently-completed Phase Two of the program's participation with the Keystone Challenge Fund added more housing to the historic Northwest Neighborhood. The City partnered with Keystone to build two additional houses on B Street, complementing the adjacent homes that were developed in the Keystone Phase One initiative.

The Keystone Challenge Fund is a Lakeland based non-profit founded more than 30 years ago which has helped more than 4,000 area families find affordable housing. Funding through the partnerships keeps mortgage payments at a reasonable rate for homebuyers, officials explained.

"Connecting people with quality affordable homes is what it's all about," said CRA Project Manager Darrell Starling. "We already have buyers interested in the new homes." .

Keystone Phase Three is now in the works. The success of the first two phases fueled a third round of new houses ticketed for vacant parcels of land on A Street between Lincoln Avenue and J.A. Wiltshire Avenue.

The Keystone initiative has helped unleash the potential for more redevelopment, according to Starling, including investment from a number of private developers. "Keystone lit the match that ignited the spark, and now the private sector is responding quickly. I can think of five developers right now who are either submitting permits or conducting surveys. We have a lot of activity that's in motion," Starling added.

The Northwest Neighborhood is within a redevelopment district that incentivizes new construction by waiving impact fees. The ongoing housing shortage is guaranteeing a steady supply of interested buyers for the properties. The Neighborhood is also the target of an effort to install miles of new sidewalks and hundreds of street trees as part of the Lake Wales Connected plan being funded by the CRA.