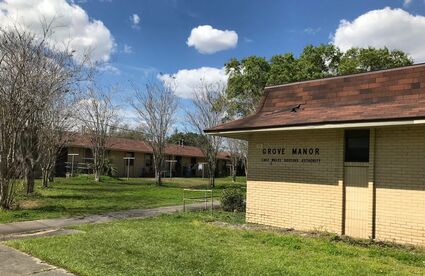 The Grove Manor public housing project has multiple maintenance issues and is slated to be replaced by a "traditional neighborhood" of mixed housing types as envisioned by the Dover Kohl and Partners designs included in the Lake Wales Connected plan being implemented by the Community Redevelopment Agency.

After expressing concerns about the lack of success achieved by the Lake Wales Housing Authority, the Community Redevelopment Agency (CRA) changed their tune after a joint meeting with the Smith & Henzy Advisory Group, the consultants for the Housing Authority.

A December discussion had led to the CRA had issuing a letter to the Authority on December 16 threatening to withhold the million dollars they had pledged toward the project, recognized as an important part of the Lake Wales Connected plan. The letter cited "the recent failures of Smith & Henzy Advisory Group to obtain State funding."

Darren Smith of Smith & Henzy Advisory Group defended his company's work, explaining that since they had applied for the funds the last two years, they are now in a much better position to be granted the funds this year. However, he said, it still works on a lottery system, so the local project is competing with other projects throughout Florida that also meet the qualifications.

Despite that, Smith stated that he "felt good" about the odds of receiving funding this year. "We're already there, it's just a matter of submitting the paperwork again accompanied by a resolution from the board" which would allow us every opportunity to win, Smith said.

CRA Chairman Robin Gibson emphasized that the project is critically important to the Lake Wales Connected Plan because the area in question has always served as a middle ground between two communities. Gibson observed that "it has outlived its productive age and we have the opportunity for a redevelopment,"

The Lake Wales Connected documents depict a re-imagined site with a mix of housing types, including affordable and market-rate, that will remove the stigma of "public housing" from the neighborhood while greatly increasing the numbers of homes. The new neighborhood would feature a mix of apartments, single-family homes and small cottages suited for single adults and seniors, all along tree-

Ultimately, CRA board members admitted that they may have been uninformed when sending the letter. Interim Commissioner Jack Hilligoss issued an apology after Smith explained the whole application process and potential funding for the project, stating that the board should have called them to a meeting sooner. Mayor Eugene Fultz echoed Hilligoss' sentiment.

"Communication is key, and we haven't been very good communicators as far as getting back to you in an appropriate manner," Fultz said.

Although no votes were taken on the matter, both the CRA and LWHA were in unanimous agreement and were rejuvenated by Smith's outlook for this project.

"This is a project that I feel is way overdue because this brings unity and equity to our community and that is something that has been missing in the past," Fultz said.