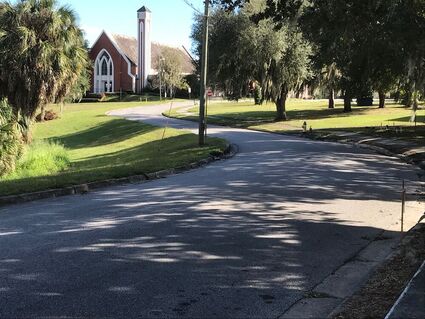 The Lake Wales Connected plan follows Olmsted's concepts of urban parks connected by linear park "corridors" so that one might travel around a city and never leave a park-like atmosphere. The soon-to-be-built "Park Avenue Trail" will actually incorporate a portion of North Third Street, turning this shady stretch into a pedestrian and walking trail near the Library and Woman's Club. The trail will link the downtown area with the Lake Wailes Park and trail system.

When Lake Wales gathers April 30 to celebrate the life, legacy and work of Frederick Olmsted Sr. at "Olmsted Day in the Park," local residents will be paying homage to more than just the famed landscape architect whose influence is still very much alive in the city today.

By 1929 when Lake Wales civic leaders hired his son Frederick Olmsted Jr. to create a master plan to enhance the city's "Garden City" concept – developed in England 1898 by Ebenezer Howard – Lake Wales and its Founding Fathers had more than a decade ago embraced the concept.

"I believe that Bullard, Johnson, Tillman and Stuart, who created the Lake Wales Land Company, were influenced strongly by the Garden City plan and directly incorporated that concept in the design for their planned city," said Robert Connors, author of two novels based on Florida history and a former president of Lake Wales Heritage, Inc.

A 20-page promotional brochure for the city, distributed in 1921, detailed that effort.

"What with attractive streets, paved sidewalks, well-kept lawns, wonderful foliage and beautiful flowers, here we have a combination tor the eye to feast upon from most every angle," it noted.

Today's award-winning "Lake Wales Connected" development plan relies heavily on trees and trails to help restore that vision. Ground is expected to be broken in the coming weeks on a Park Avenue Connector Trail that will unify the existing Lake Wailes Trail and historic downtown.

It is something Olmsted and the Founding Fathers would clearly applaud.

"They wanted to create this resort town, this planned city in such a way that it preserved all the parks around the lake. It was intended to be a 'garden city' from the get go," Connors said.

Olmsted's work was well known to city leaders. He had helped plan many of the houses and landscapes at Mountain Lake, and the gardens and landscaping at Bok Tower as well.

"When Olmsted came down and saw it, he was mightily impressed. It was like 'here's this really cool piece of canvas that I can work with.' It was appealing to him," Connors added. "He wasn't trying to start from a jumbled up mess. He had something he could apply his techniques to and enhance it. He was quite smitten."