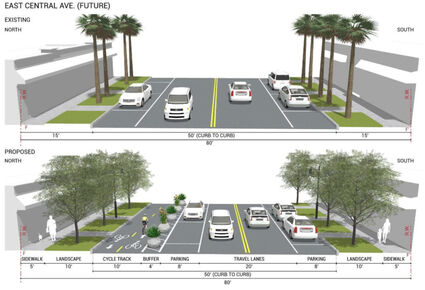 The re-imagining of downtown Lake Wales and the application of the Connected plan is now inspiring some significant proposed changes to Central Avenue between Scenic Highway and First Street.

In keeping with the concepts advanced in the award-winning Lake Wales Connected plan, a new pavement configuration which will add a bike lane to the north side of the street was approved at Tuesday's Community Redevelopment Agency meeting. The board will enter a $35,000 contract with engineers Chastain-Skillman to design the project and create the bid documents.

The conceptual plan will reduce the width of traffic lanes to create a wide "bicycle track." That travel lane will be sheltered from motor vehicles by a combination of landscaping and auto parking. The concept builds upon the other bike tracks being incorporated along Park Avenue and First Street, creating a bicycle-friendly city center. The new bike lanes will be connected to the Lake Wailes Trail by the new Crystal Lake Park trail.

Eventually it is expected that the entire network of connected trails will be linked to a county-wide system via inter-city trails both north and west of Lake Wales.

Construction of the new street configuration will require the removal of some oak trees across from Polk State College and palms farther east, but plans are to replace those and add additional oak trees as part of the new design. The design concept retains parking but narrows the automobile travel lanes, which has a "traffic calming" effect.

Other elements of the Lake Wales Connected plan, funded by private donations through Lake Wales Main Street, include improvements to Orange and Crystal Avenues, with new landscaping and "street furniture" to match that being used on Park Avenue.

The largest single project in the Connected plan will be the redesign of First Street, a project which will include the entire length of the major connector from Tillman Avenue through the downtown area north to Dr. J.A. Wiltshire Avenue. The Connected plan aims to link the city's parks and neighborhoods with pedestrian and bicycle trails, as well as automobile "parkways" featuring lush landscaping.

The addition of a portion of Central Avenue brings to more than 45 the number of blocks to be improved under the plan, including many blocks of new sidewalks and street trees in the Northwest Neighborhood. 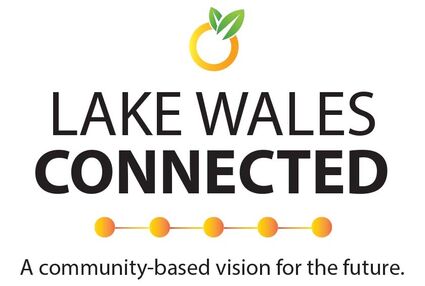 The new logo of the Lake Wales Connected effort

The plan is being funded by an $18.5 million bond issue guaranteed by the "increment" of county and city property tax revenue captured by the CRA. That revenue flow will only grow with rising property values, driven in part by planned improvements in an upward spiral. The board recently extended the life of the agency for an additional 30 years.

Some additional funds are anticipated to be received from the Federal government as part of the infrastructure bill.