"Bloody Murder" Is An Entertaining Romp That Dismembers a Genre 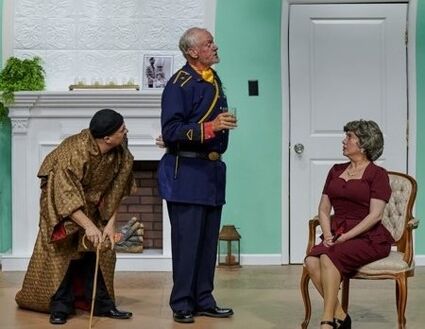 Major Quimby (center) expounds to Lady Somerset as the mysterious Mr. Woo snoops in an early scene from the farcical "Bloody Murder" now being performed at Lake Wales Little Theatre.

"Bloody Murder" isn't normally anything to laugh about, but when interpreted by a cast of characters in the current production at Lake Wales Little Theatre you'll find yourself doing just that.

From its generic roots as a set-piece "murder in an English mansion" circa 1930's drama, the play quickly sweeps the audience into something quite different.

The action takes place in the elegant home of Lady Somerset, played by Jessica Jimenez, who has invited the group together to amuse herself by exposing their darkest secrets, which she learns from her mysterious sleuth, Mr. Woo.

The intentionally-stock characters, including Major Quimby, full of stories of his heroism during his service in "Ind-ya," played by John Durbin, and his steady foil, the hard-drinking failed actor Devon Tremaine, played by Brad Breaux, lead the audience down an unexpected rabbit-hole as the story-line takes a series of surprising, and often hysterical, twists.

the elegant and reserved Countess, played by Paula Parra-Sifontes, arrives as the guest of Lady Somerset, while her scheming nephew, Charles Pomeroy, is played by Seth Zaradona in an over-the-top performance well suited to the later revelations. Lori Boyd rounds out the cast as the maid, Jane, who seems to know all the secrets. 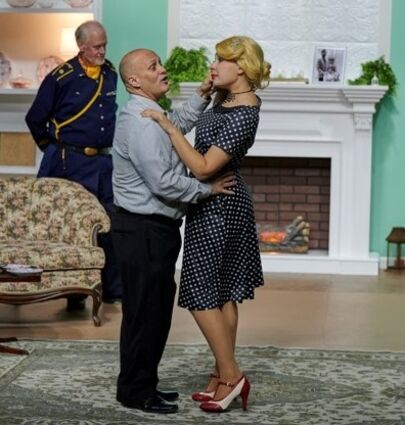 It's not long before the title act occurs, cascading the talented cast into a series of strange twists, until a realization among the characters begins to turn them into co-conspirators.

While there are other characters in this performance, filled with surprising and sometimes hilarious twists, they can't be revealed without spoiling a plot that eventually leaves the stage littered with "bodies."

The single-scene set is well designed and with a series of nice touches that enhance setting for the ensemble cast.

"Bloody Murder" is a farcical romp that dismembers the genre and provides a very entertaining evening. The play will be performed on Friday and Saturday evenings at 7:30 and Sunday matinees at 2:00 through April 3. Tickets are $20 and available online at