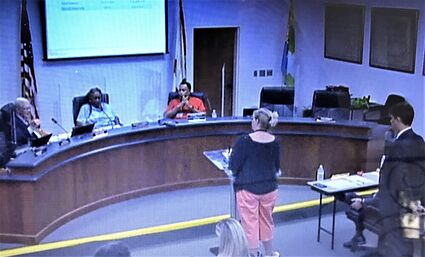 With some $4 million in interest payments riding on the decision, three city commissioners gave direction to staff at Wednesday's workshop to pursue a 30-year bond rather than shorter-term bank loans to finance the $18.5 million earmarked for the Lake Wales Connected plan.

The most-significant action ever undertaken by the City of Lake Wales or its related Community Redevelopment Agency, the huge investment is intended to breathe new life into the venerable heart of the city, including the Northwest Neighborhood. The plan will take several years to complete. Construction documents are nearing completion for the two largest phases of the project, involving Park Avenue and First Street.

Mayor Eugene Fultz, Deputy Mayor Robin Gibson, and Commissioner Terrye Howell listened to the presentation by Will Reid of Ford and Associates before offering their recommendation to staff. The non-binding opinions offered by the trio were given in the absence of commissioners Jack Hilligoss and Daniel Williams, who did not attend the meeting.

The item was presented in the workshop setting to give direction to the city's bond consultants, Ford and Associates. The CRA currently receives more than $2.2 million each year in captured city and county revenue from within the defined district. That revenue stream will be used to retire the debt.

City Finance Director Dorothy Abbott strongly advocated for the more-expensive 30-year bonds, stating that the alternative would leave the CRA with "only about $600,000" each year "for 20 years" to pay for other projects or expenses. "You can starve yourselves," she added.

Deputy Mayor Robin Gibson challenged that assessment, saying that it didn't account for either growth of the tax base or inflationary rises in property values, which have increased by about 19 per cent in the last 12 months. The plan is expected to spur investment by the private sector, an effect already underway.

Utilizing the bonds will cost more upfront, a number Abbott estimated at $250,000 rather than the $100,000 cost of bank financing. The rest of the increased costs reflect interest for the longer period.

Ultimately Reid also gave his tepid endorsement to the 30-year bonds after admitting that there were few banks willing to enter a 20-year municipal loan deal. Rising interest rates, being driven in part by the Russian invasion of Ukraine, have already increased the long-term costs of the project.

The award-winning Connected plan includes multiple elements ranging from new trails and sidewalks to complete reconstructions of nearly 20 blocks of city streets. It is the most ambitious urban-renewal effort ever conceived in the area. The Community Redevelopment Agency recently extended its life for another 30 years to fund future investments in the districts.