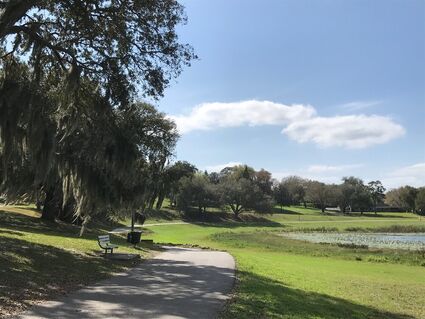 On Jan. 27, 1931, residents along Tillman Avenue in Lake Wales got good news. The oak trees would be saved.

A plan drawn up by the world renowned landscape-architect Frederick Olmsted Jr. for extensive tree planting in the city had called for some of their nearby oaks to be removed. Residents petitioned Olmstead to reconsider, and he did. As noted in a letter from his firm on that date, Olmsted's plan took many things into consideration, simplicity being chief among them.

"Throughout the street tree planning, we endeavored to avoid arrangements and dispositions requiring special skill and judgment, such as pruning, shifting and trimming." they wrote. "Our conclusion is that if the oaks are allowed to remain, and providing proper attention is given to pruning in later years, the intent of the plan will not be essentially impaired."

That's why Olmsted's vision for Lake Wales – from trees to connected trails and the all-encompassing "city in a garden" concept – served as the underpinnings to the award-winning "Lake Wales Connected" plan drawn up by Dover Kohl and Partners, perhaps the most prestigious city and town revitalization planning firm in the country. The new vision was adopted by the city in 2019.

Work is expected to begin soon on the Park Avenue Connector Trail, which will string together the city's historic downtown, Crystal Lake Park and Lake Wailes. Tree plantings have already begun, and will continue at an accelerated rate in the coming months under the watchful eye of the city's full-time horticulturist, Lester Gulledge

"The core neighborhoods of Lake Wales are meant to be inspiring beautiful places. Olmsted had a bold, green vision that Lake Wales should be a living, growing work of art, a city as a garden," said Victor Dover, one of the founders of the firm in 1987. "The new plan for downtown and northwest neighborhood is to revive that vision."

The firm's comprehensive plan addresses far more than trails and trees, however. The plan also calls for the addition of a new town square, extending trails and bike paths to unify city neighborhoods, completing a network of walkable sidewalks, and encouraging more affordable housing and home ownership through city incentives.

"The city now has an opportunity to pick back up on the Olmsted legacy and realize their vision, to connect the missing linkages in the open space network, and make public space landscapes a spectacular and defining feature of Lake Wales," Dover added.