T Mobile Gives City $48,000 Toward Landscaping "City in a Garden" 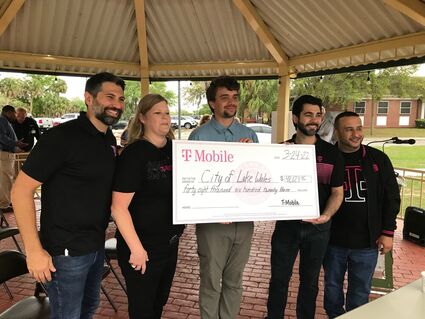 City of Lake Wales Horticulturist Lester Gulledge, center, proudly holds the check representing the $48,623 grant the city has received to implement his landscapes design for the downtown linear park. A happy crew from T Mobile joined him and city officials to present the award.

A Thursday-morning ceremony in downtown's new linear park saw plenty of smiles as a crew representing T Mobile presenting a mock-up giant check representing their company's grant of $48,623 that was awarded to pay for landscaping the park, which borders Scenic Highway opposite the public library.

The grant is part of T-Mobile’s Hometown Grants Program to help communities across the country kickstart development projects that will enhance the area and help enrich the lives of residents.

"This grant will enhance the Downtown Linear Park to create a welcoming public gathering space with significant new trees and Florida-friendly plants," said Roni Singleton, Sr. Manager for public relations for T-Mobile, adding that "it will help Lake Wales activate underutilized space for the benefit of the community and to help it become a regional destination."

The result of a nationwide competition, Lake Wales was one of 20 winners out of more than 400 entrants. The funds will pay for what City of Lake Wales Horticulturist Lester Gulledge described as his "dream landscape."

"I didn't really expect to receive the grant," he told LakeWalesNews.Net, "so I just went with my favorite vision" which includes a variety of layers and textures. The plans calls for a Southern Live Oak and a pair of date palms, accented by other low "understory" landscaping along the highway side of the strip, which Gulledge described as "40-mile-an-hour landscape," while a new low fence, shrubs and two new canopy Southern Live Oaks will be placed on the pedestrian, library side of the railroad line. One is intended to replace an aging water oak that will eventually have to be removed, Gulledge said.

The grant was heralded by City Manager James Slaton as a big step forward in realizing the "Garden City" reputation that current efforts are striving for. That moniker derives from the original concept of Lake Wales as advanced by Frederick Law Olmsted Jr. almost a century ago. The city's first city-wide landscape plan was designed by Olmsted at the expense of Edward Bok after his completion of the famous Singing Tower.

While the city is moving to emulate the Olmsted plan within the downtown area during the construction of the Lake Wales Connected effort, many residential areas of the city are falling within the sights of Lake Wales Heritage, a not-for-profit group planting the missing trees from Olmsted's designs. That group is undertaking an $11,000 project to replant the lost magnolias along Lakeshore Boulevard. That effort will take place on April 8 and 9. The public is encouraged to join volunteers at 10:00 am Saturday morning, April 9, for a dedication ceremony for the new trees. That will take place at Crystal Lake Park.