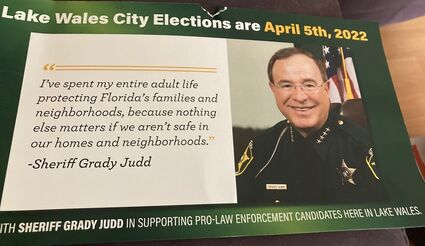 A pair of postcards that combine to create a deceptive narrative of a non-existent endorsement for two Lake Wales candidates include photos of Grady Judd, who stated that "I did not and am not endorsing any local candidates."

Most Lake Wales voters have received a pair of deceptive postcards mailed by two out-of-town political committees that have caused Sheriff Grady Judd to issue a statement denying that he is supporting any candidates in Tuesday's City Elections. The postcards, taken together, falsely imply that Judd has endorsed candidates for mayor and city commission.

"I did not and am not endorsing any local candidates," Judd said in response to an email request for comment from Chevon Baccus, who is managing candidate Curtis Gibson's mayoral campaign.

Gibson said the postcards were clearly from "outsiders trying to influence our local city elections."

The postcards were paid for by two out-of-town entities. One postcard claims to be from the "Foundation for America's Families," but a search of both corporate records and Google turn up no record of such a foundation, which cites a West Palm Beach UPS letter box as its location. The other came from a registered Tallahassee political committee. That committee is funded by other committees, making it impossible to know who is behind the mailing. The same lettering is used in both flyers.

One postcard includes photos of Judd and reads "Join Sheriff Grady Judd in supporting pro law-enforcement candidates." The second attempts to direct voters to two candidates, Jack Hilligoss and Danny Krueger, implying that the other candidates, including Tammy James, James Loydd, and Curtis Gibson, are not in support of law enforcement.

City commission candidate James Loydd is a long-time youth leader who has coached for the Police Athletic League. He said that he has met with Lake Wales Police Chief Chris Velasquez and other officers and discussed the positive future they share for Lake Wales.

Judd said he’d been asked to endorse the two candidates, but declined, citing his commitment to steer clear of local elections. But he did agree to the flyer encouraging residents to support law enforcement through their votes.

“It’s up to the voters to decide who the law and order candidates are,” he said. “I am not going to endorse anyone in the Lake Wales City Commission race.”

How Krueger and Hilligoss were chosen to be boosted by the foreign political committee is questionable. Krueger has never held public office and has no record, pro or con, on law enforcement. Hilligoss has held an appointed position on the city commission only since September and has not been involved in any significant decision regarding the local police department.

A similar effort last year by a Lakeland mayoral candidate to associate herself with Judd and law enforcement ended in her solid defeat after the sheriff made it clear he wasn't endorsing her, or anyone else, telling The Ledger that he simply does not endorse candidates in municipal elections.