Reconstruction of Park Avenue Expected to Begin This Autumn 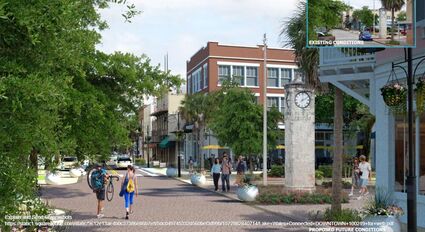 A vital channel of communication between downtown merchants, the Community Redevelopment Agency and Lake Wales Main Street was opened at a breakfast meeting at the MarketPlace Café Thursday morning, The meeting was part of an effort to familiarize the group about the pending impacts of construction of the Lake Wales Connected revitalization project.

Some thirty downtown businesspeople and property owners gathered to hear a presentation from Main Street Manager Karen Thompson, City Manager James Slaton, and city projects coordinator Michael Manning. The trio also responded to questions regarding issues such as parking and other infrastructure involved in the vast effort, but focused primarily on the major work which will take place on Park Avenue.

The Lake Wales Connected plan, an $18 million project being undertaken by the CRA, will involve the reconstruction of Park Avenue in an early phase, followed by extensive work on First Street, as well as other changes on Central, Orange, and Crystal Avenues.

"We want to make sure this project has the least impact possible" on downtown businesses, Slaton said.

In response to an audience question regarding maintaining the historic feel of the area, Manning explained that it will be enhanced as Park Avenue's asphalt is replaced by brick pavers. Other elements will include lush landscaping and architectural lighting.

Among early work, slated to begin in coming weeks, will be work to bury electrical lines around the MarketPlace. That will also require removing some trees, which will be replaced when that work is completed, Slaton said,

Landscaping work will commence on Stuart Avenue in "a week or two" to replace understory landscaping with new, Florida-friendly native species. Existing trees will not be affected during that project, the audience was assured. 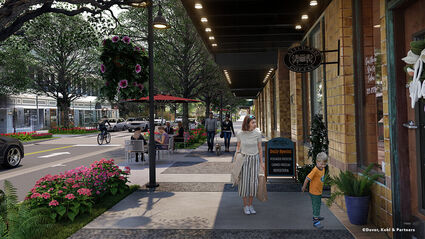 The eventually redesign of Stuart Avenue, still some years in the future, will seek to unify the new standards set by the Park Avenue project, Similar enhancements will be used on Central, Crystal, and Orange Avenues, as well as First Street.

Work on the long-awaited Park Avenue reconstruction is expected to be delayed another 10 days or so, until "September-ish," according to Slaton, as the CRA seeks to pre-qualify potential contractors to screen out unqualified bidders in advance. Once that is completed, the bid process will take an additional 30 to 45 days. The work will include restoring two-way traffic.

"People don't realize how big and complicated this project is," Slaton told the LakeWalesNews.Net following the meeting. "We are dealing with 35 action items right now." Those would include the Park Avenue Connector Trail, for which ground will be broken at a ceremony Monday morning.

"I was extremely please by the turnout," Thompson said, "and I hope for as many or more at each one as we move forward," promising to provide "good, valuable information at each one." Eventually, she added, a project manager representing the contractor will be running them.