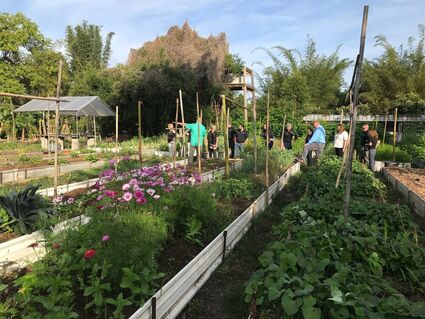 Scores of both familiar and exotic fruits and vegetables are grown at the Heart Village in Lake Wales, allowing potential missionaries to become familiar with their cultivation and uses. Here Executive Director Phil Murphy leads a Lake Wales Chamber Leadership class through the extensive gardens.

Voluntarily suffering hardships may seem an unlikely choice for most people, but for hundreds of young students at the local Heart program it's been a pathway to self-discovery and a way to help others.

A recent tour of the rustic facility, led by program executive director Phil Murphy, offered the Leadership class of Lake Wales Chamber of Commerce a look at the conditions of life in much of the world, where electricity and running water are often luxuries.

The Heart Missionary Training Institute is a 501 (c) 3 not for profit institute that has served a host of primarily college-age visitors for 40 years. Many go on to become missionaries, bringing their new skills to improve the lives of people in far-flung regions of the world, including South America, Africa, Southeast Asia, and the Pacific islands.

The "Heart Village," deep in the woods behind Warner University in Lake Wales, allows future missionaries an opportunity to learn animal husbandry and gardening skills, as well as how to deal with the spiders and other denizens of often-remote jungle locations.

Murphy introduces students and occasional guests to his menagerie of farm animals, including goats, rabbits, pigs, chickens, turkeys, ducks, geese, quail, guinea fowl, and more. Even tilapia and earthworms are raised by the students.

A Southeast Asian water Buffalo is a new addition and is hoped to be used for milk as it is in much of the world. In Italy, Murphy pointed out, it's the source of the prized Mozzarella di Buffala used on Neopolitan pizzas.

Students learn not only to raise the animals, but eventually how to kill and cook many of them. For some it's a serious challenge.

"I had a student who ran away in tears when asked to pull the head off a chicken," Murphy said. "Now she's an instructor teaching these same skills at Youth With a Mission."

The program will host 15-week courses this year in January and August. The program even offers college credit at some universities, although one couple in their 60's went through the program and continued to a mission in Honduras.

Students turn in their cell phones to live in rough "Heart Village" quarters built by previous classes without running water, electricity, or even glass windows, as only screens fill the openings that allow breezes inside. Limited electrical service is provided in the common areas such as the communal kitchen.

Authentically-equipped "outhouses" are, in actuality, connected to plumbing due to county regulations, but an Asian example displayed to the group featured a concrete floor with a hole. "If you miss, you have to clean it up, that's our rule," Murphy told the group with a smile. 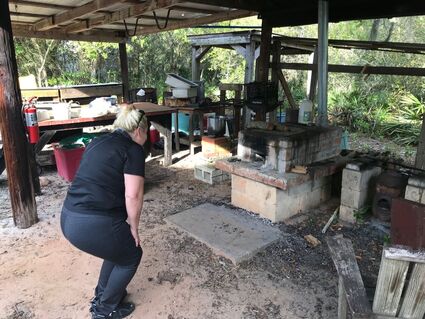 Nancy Hernandez, utility support director for the City of Lake Wales, gets a closer look at one of the efficient ovens students learn to build as part of the Heart training program.

Murphy and his wife, Lonnie, have been associated with the program since its founding, and served in Haiti for 21 years, returning to help run the program in 2008. He became executive director in 2010. Lonnie teaches kindergarten at Polk Avenue Elementary in Lake Wales after teaching young students at a private school in Haiti.

Murphy also returned to Haiti for seven months in 2010 to help build houses after the devastating earthquake that year, which destroyed more than 83,000 homes, left hundreds of thousands homeless, and almost 1,500 people dead.

Those interested in learning more about the program may visit The HeartVillage.org or phone 863-638-1188. The program is largely funded by donations, which are always welcomed.

EDITOR'S NOTE: This is the first installment in our series "Acting on Faith," reflecting the positive impact of faith-based organizations in the Lake Wales area.