Some 100 persons gathered at noon Friday in Lake Wailes Park to walk "The Way of the Cross," a shared Christian tradition marking the passion of Christ.

Cooled by a slight breeze, the group listened intently to prayers offered by ministers from the various denominations on what is considered one of the holiest days of the Christian calendar. 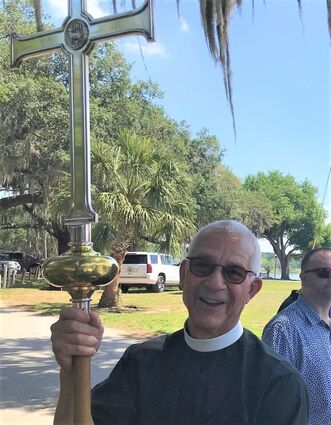 Reverend John Motis of the Episcopal Church of the Good Shepherd prepared to lead the "Way of the Cross" observance in Lake Wailes Park at noon on Good Friday, marking the passion of Christ.

Held under the sprawling grandfather oaks of the park, the devout procession wound its way through eight stations scattered around the center of the park, each marked by a simple wooden cross. At each stop prayers and hymns were shared by a group of nearly 20 area ministers in an ecumenical showing organized by the Lake Wales Ministerial Association. The observance was coordinated by Rob Quam of the Lake Wales Care Center, who called it "a great event."

"We had seventeen pastors from sixteen churches participating," Quam said, adding that others were unable to join the group as they were having simultaneous observances at their own churches.

The annual event has been conducted in Lake Wales for decades.