Moore Was a Familiar Presence at Civic Events 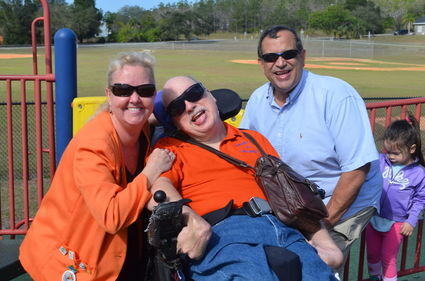 Lake Wales Kiwanians Cynthia Rignanese and Barney Moore celebrated the 10th anniversary of the Barney's Dream park with Stirring Waters CEO Mike Rodriguez in 2019. The playground was designed to accommodate all children, regardless of ability.

Born with quad-atonic cerebral palsy, Moore spent most of his life in a wheel chair but managed to be civically active. His intellect and wit were legendary, as was his ability to lead others to productive action. He was inspired by his own disability, and made it a vehicle to provide for others. Among his proudest accomplishments was a playground.

"There should be a park where all kids can play together," Moore recalled saying as a child. As he watched his brothers and sisters playing in the only park that was available he began dreaming about a playground where he and all kids with physical challenges could play together.

Moore was deeply involved in the Lake Wales Kiwanis Club where he maintained perfect attendance for more than 35 years, and for which he served terms as treasurer and president. There Moore proposed his idea for a playground at Kiwanis Park to his fellow Kiwanians, who set about sharing the idea with the broader civic network.

Eventually dubbed "Barney's Dream," the playground concept was promoted and gained widespread support, eventually earning grants from local governments that made the $250,000 project a reality. The finished park features wheel-chair accessible rides and slides, and was dedicated February 2, 2009.

Moore's mother Dorothy raised him to believe that he could do anything and was his pillar of support. After Moore received his Associates degree at Polk State College, Dorothy drove him to Tampa three days a week so he could earn his Bachelors degree in public relations from the University of South Florida. After her passing, others in the community stepped forward to share in caring for his needs, driving him to numerous sporting events and other activities.

"She didn't want anything special for me. She just wanted me to be able to enjoy the things everybody does," Moore said of his mother after her passing. "Different doesn't mean good or bad, it just means different. I have different abilities. There's stuff I can't do, but there are ways to work around it if you think about it and want to do it. We need to enjoy life because life is meant to be lived."

Through his service on the advisory board of the Lake Aurora Christian Assembly, Barney's desire that all children have the ability to play together also inspired Director Bill Redmon. Together they conceived of a program called "Stirring Waters" and a water park for disabled children which includes such features as a "lazy river" culminating in a "conveyor belt" serving a 300-foot-long water slide. The lazy-river feature has since been named "Barney Creek."

"In his dreams he was always walking," said Larry Tonjes, a long-time fellow Kiwanian. "He was an inspiration to anyone who met him. He wasn't shy about asking for help, which allowed him to accomplish much in his life. His impact on Lake Wales was amazing."

"He got his first electric wheelchair in high school after a student service club raised the money," Tonjes said. "Barney had an opportunity a few months ago to go fishing for the first time, and he caught a bass which was cooked for dinner."

Barbara Moore, wife of brother Chuck Moore, knew Barney since he was 15, and observed that "he's done amazing things." "He was always 'Uncle Barney' to my two boys." she said. She described how he had served as an assistant to the Lake Wales High School football teams, where he was named an "inspiration coach," and attended most games.

He served on behalf of the Care Center, Lake Wales Passion Play, and the Circle of Friends. He was also named as an honorary deputy sheriff so the Polk Sheriff's Foundation could send him a specially-equipped van they had received as a donation.

He and his mother were named Citizens of the Year in 2001.

"He had many physical challenges, but he never let that stop him from smiling, enjoying life and chasing his dreams," said longtime fellow Kiwanian Cynthia Rignanese.

Friend Debbie Carter commented that Moore had often danced with her in his wheelchair, but "he is dancing with his feet now."