This artists' conceptual view looking toward the south-southeast of a transformed Northwest Neighborhood shows the impact of hundreds of street trees which will shade new and repaired sidewalks throughout the area. The inset in the upper left shows the current conditions. New infill housing and commercial buildings are depicted in yellow.

Plans to build sidewalks and plant scores of shade trees to enhance the Northwest Neighborhood, part of the Lake Wales Connected plan, received a major boost last week with the announcement that the City of Lake Wales was awarded nearly a $1.2 million grant.

Lake Wales is one of ten Florida communities awarded funding through the Rural Infrastructure and the Community Development Block Grant (CDBG) program, administered by the Florida Department of Economic Opportunity.

"This grant is going to help the City make an immediate impact to the infrastructure in the Northwest Neighborhood," City Manager James Slaton said. "Residents will be able to commute safely to nearby schools and area parks," he added.

The Connected plan is an ambitious program that will see the transformation of more than 50 blocks of the city, creating shady walking trails and sidewalks, and in many cases, complete reconstruction of streets. Downtown's Park Avenue will be resurfaced with historic brick and replanted with live oaks.

The funds used to widen sidewalks and footpaths in the Northwest Neighborhood are expected to increase the safety of pedestrians on designated walking spaces. Construction on the sidewalks is set to begin this year on select streets between Dr. J.A. Wiltshire and Florida Avenue. Plans include rehabilitating preexisting sidewalks. New sidewalks will be added along established streets without sidewalks. 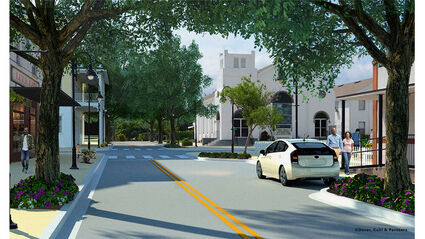 Creating a leafy, peacefully-inviting atmosphere is seen as important in the revival of the Lincoln Avenue business district.

The city has also been awarded a Federal Infrastructure grant of $800,000 which is expected to fund improvements to Orange and Crystal Avenues east of First Street. The majority of the funding for the Connected plan will be through the Community Redevelopment Agency, which is issuing about $18.5 million in bonds, guaranteed by the current CRA revenue stream of tax increments.

Such Tax Increment Financing, which must be spent solely within the CRA district, normally further increases property values, resulting in still further increases in the tax increment captured by the CRA from County and City property tax streams.