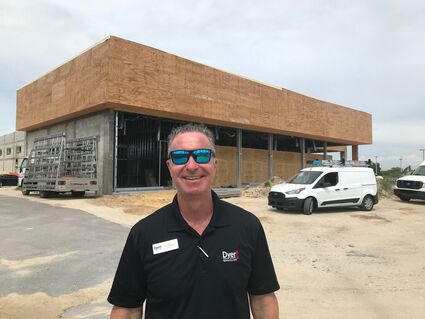 General Manager David Dlugokecki is looking forward to the anticipated July opening of the new Dyer Chevrolet location on US 27 opposite the Eagle Ridge Mall. His current duties require shuttling the two miles between his current responsibilities at Dyer Kia and Dyer Chevrolet.

The gradual expansion of the Lake Wales Business Community is receiving another boost as the Dyer Auto Group prepares to open their new Chevrolet dealership on US 27 North across from Eagle Ridge Mall.

Dyer's new $5 million dealership is a significant expansion from their current location two miles south, according to General Manager David Dlugokecki. The new location will also allow the family-owned business to co-locate their two local new-car dealerships. Dyer Kia moved into their adjacent location in October of 2019.

Dlugokecki said the Dyer family acquired the local Chevrolet franchise from prior owners Steve Sorenson and Steve Schade "on a handshake deal" after the pair approached them about selling. Owners Will, Tatiana, and John Dyer have built a chain of auto franchises in Florida, primarily along the east coast. This purchase "was a natural since the Dyer family already owned Chevrolet franchises in Vero Beach and Fort Pierce," Dlugokecki said.

Dyer Chevrolet already employs 94 people locally, according to Dlugokecki, and needs to hire "a dozen more" to fully utilize their expanded operations in the new building, which features 19 service bays instead of the 12 they use now. The new service center will also offer more lifts, and be fully climate-controlled, allowing mechanics to work in comfort. "That's a big deal," he said.

The personable Dlugokecki has many years of experience in the automobile business, having worked previously at local dealers Huston Cadillac GMC and Hill Nissan. He places a high value on corporate culture and is on a first-name basis with each of the nearly 200 employee in the sprawling operations. 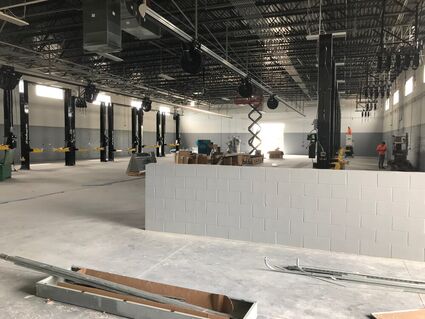 The vast interior of the new $5 million Chevrolet operations will allow the expansion of service to include 19 bays, The Dyer-owned franchise anticipates hiring a dozen new employees to staff their larger facility.

According to Dlugokecki the current location of Dyer Chevrolet will be leased with an option to purchase to a private collector of classic cars who will relocate his vehicles there.

The new building is essentially a mirror-image of the existing Kia dealership, since the floor-plans were simply reversed, allowing for a smoother traffic flow between to two adjacent service centers. The adjoining properties will also allow for centralized accounting, and a new detailing center that will service both dealerships, complete with a new free-standing car wash facility in the rear.

The opening of the new facility, being built by general contractors Bill Bryant and Associates, Inc., is expected to take place in July. Construction of the 28,000 square foot dealership has been delayed by some specific supply-chain issues, most recently by the slow delivery of the enormous windows that will front the dealership.