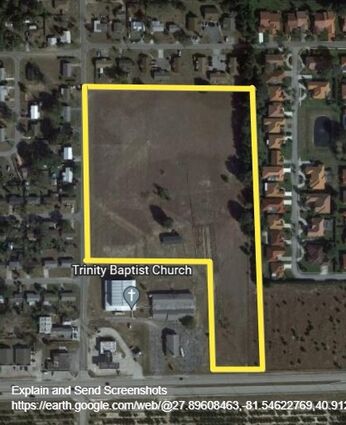 The northern portion of this 16-acre site will be made available for residential development following a decision by the city commission Tuesday. The property lies just west of Lake Wales Country Club, visible at right.

A request by Trinity Baptist Church for a designation of MDR- Medium Density Residential was met by a recommendation for a lower density LDR designation by the Planning and Zoning Board at a meeting on April 26, and now Pastor Michael Blare has indicated that he is likely to appeal to commissioners for the higher density provided by the MDR Comprehensive Plan map designation and R-3 zoning.

The City Commission will hear the matter at their regular meeting Tuesday at 6:00, when the first reading of the ordinance will be voted on.

Blair pointed out that any final plat of the property would have to be approved by the city in the future. The 16-acre parcel on the east side of the city was annexed into Lake Wales in January

The rezoning request will impact the entire parcel, but according to Blair only the northern eight-acre parcel is to be made available for sale to a potential developer.

"We need to do this mostly because of the liability," Blare told LakeWalesNews.net. "People drive their four-wheelers on it, they play golf on it," he said, adding that 'no trespassing' signs were often ignored.

The property is located north of State Road 60 East and east of Evergreen Drive, and adjacent to the Lake Wales Country Club. The property has been owned by the church since 1981 but much of the parcel has remained vacant. The church stands at the southern edge of the property nearest the highway, while the vacant acreage lies to the north.

According to the Development Services staff report being presented to commissioners, a "Land Use designation of LDR achieves the least intensive density and is compatible with the surrounding area as the property is surrounded by existing residential development on three sides."

Lived in this area 40 years and I disagree with the pastor. People were banned from hitting golf balls years ago on this property and when they did hit golf balls they hit the balls towards the east end where nothing exists. Haven't noticed a 4 wheeler on the property in a while, posted signs are up. Evergreen road is a drag strip now with vehicles running at times high speed down the straight road, motorcycles run the road I guarantee you some hit 70. Sheriff dept sent out a slow down sign a few years ago after complaining of high speeds on the road with kids walking the road to get on and off school buses, did no good and the sheriff dept never returned.. One detective told me the reason for the high speeds up and down the road was drug buyers going to the drug houses near Grant road and they were in a hurry to leave the area after their purchase.. Building on this spot will only add more dangerous traffic getting onto Hwy 60 and Evergreen and other roads in the area..