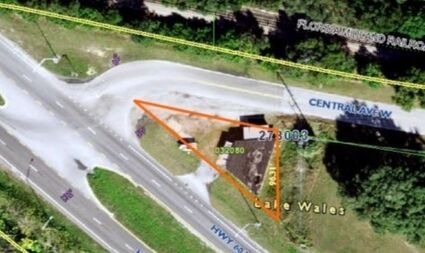 The prominent corner of West Central Avenue and SR 60 will get a new look as a result of action by the Community Redevelopment Agency. The tiny property is expected to become the site of a "gateway" welcome sign. The intersection is also being considered as a potential crossing for a new access road for Lake Wales Airport. The parcel is depicted incorrectly on this image provided to commissioners.

EDITOR'S NOTE: This story has been updated to include comments from City Manager James Slaton.

A confusing staff report may have led to city commissioners, sitting as the board of the Lake Wales Community Development Agency, paying more than intended for a small parcel of land and a dilapidated building. A staff report contained errors on the value of the parcel.

The prominent eyesore at the corner of West Central Avenue and SR 60 West property is eventually expected to be torn down if recent action taken by the CRA is upheld. The purchase was approved with the intention of creating a new "gateway" into the city from the west. The property lies a short distance west of the Lake Wales Plaza.

On a 5-0 vote following a ten-minute conversation, the board agreed to purchase a 1788 square foot block building for $60,000. The building, long known locally as "Clark's Corner," was once a country store. It has been vacant for years. The property is a remnant of a larger parcel severed when SR 60 was widened in the 1960's.

The sale will produce a windfall profit for seller Kevin Kitto, owner of JAK Rentals, LLC, who purchased the property in January for $40,000. It has a taxable value of $408, according to the Polk County property appraiser, with a building value of $308 and land value of $100. The triangular lot is a bit more than 6,000 square feet, or .14 acre, and less than 100 feet wide.

In introducing the topic, Development Services Director Mark Bennett suggested that he had advised Kitto during a meeting at the site that the property was unsuitable for redevelopment, as it lacks space for parking or storm-water retention and doesn't meet setbacks as constructed. It was formerly a gasoline service station, and could potentially contain old fuel tanks.

Commissioners discussed the valuation of the proposed sale, and CRA Chairman Robin Gibson asked Bennett what Kitto had paid for it, to which Bennett responded, "I believe forty or forty-four." Gibson then asked what the property was appraised at for tax purposes. "I believe forty," Bennett replied.

Discussion then followed with Gibson suggesting that he is used to assuming that the number is about 80 percent of the market value, "and that's 50 (thousand dollars)."

Commissioners discussed the value of the site to the City of Lake Wales as being increased due to its potential as a "gateway," The cost of removing the existing building was mentioned by Commissioner Terrye Howell as a consideration, along with the anticipated cost of building "a stone sign" to welcome motorists into the city limits.

After the actual tax value of the property was shared with Howell by News staff, she reacted in surprise. "I wish this could be reconsidered, because there's a big difference between four hundred and forty thousand," she said. "I feel misled. We've still got to tear down the building, and we're going to be paying extra money besides the $60,000, for environmental studies and all. I really do wish this could be reconsidered. No one can do anything with it that's...going to be on our tax roll." 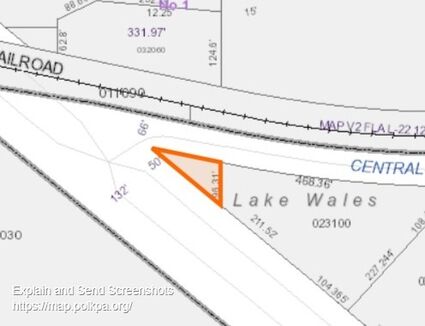 Other commissioners were unavailable for comment. It is unclear at this time whether documents have been finalized to complete the sale, or if the CRA can reconsider the offer amount.

After this story was initially published, City Manager James Slaton issued a clarifying statement explaining the reasoning behind accepting the offer of sale without hesitation. "We've been wanting to acquire this parcel for years," Slaton told LaekWalesNews.Net. "We missed an earlier opportunity, and we didn't want to let it slip away. It's in the city's interest to remove that eyesore, and it's really the ideal place to put a welcoming entrance to the city."

Slaton admitted that the presentation could have been clearer, but said that he had personally given the go-ahead for the purchase due to the importance of the property to the city.