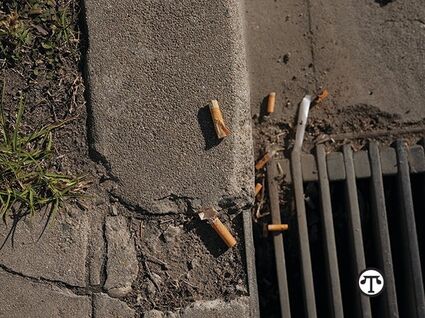 Cigarette butts find their way into our Florida waters, leaving microplatics as they decompose. Tobacco is also toxic to fish.

(NAPSI)-It's likely you see one of the most common sources of plastic pollution everyday-on the ground, in parking lots, in gutters or at the beach-cigarette butts. This is not trash but toxic garbage and plastic pollution poisoning marine life and humans.

Since cigarette filters are made of plastic, they can take years to decompose, leaving behind toxic microplastics that pollute our environment-and could make their way inside of us. In fact, every smoked cigarette filter contains 15,000 strands of microplastic fibers. Though often invisible to the human eye, microplastics are nearly everywhere-polluting the food we eat, the water we drink, and even the air we breathe.

So, what exactly are microplastics? Microplastics are tiny pieces of plastic measuring less than 5 millimeters long, or about the size of a sesame seed or smaller.

Due to their tiny size, microplastics are nearly impossible to remove from our food and water sources. As a result, they can cause great harm not only to our environment, but also to our health. It might come as a surprise to learn that Americans ingest an estimated tens of thousands of microplastic particles a year.

Adding to the problem, cigarette butts are the most littered item on Earth. They're also the most discarded item found on California beaches and waterways.

"Though microplastics are small, the microplastic fibers produced from smoked cigarette filters can cause massive damage to our environment and our bodies. Microplastics pollute our oceans and leach into our soil, and as a result, can harm our wildlife, our food sources, and consequently our health. Putting an end to tobacco product waste isn't just best practice but a necessity for the health of our environment and our communities," said Eben Schwartz, Marine Debris Program Manager at the California Coastal Commission. Florida, with a thousand-mile coastline and thousands of lakes, is even more threatened.

The tobacco industry is a top global plastic polluter, producing six trillion cigarettes every single year. More than 4.5 trillion cigarette butts are dumped into the environment globally, each year, and the microplastic remnants can make their way into our communities, our food, and ultimately our own bodies. Microplastics have been found in apples, pears, lettuce, broccoli and carrots, as well as in seafood commonly consumed by humans.

Holding the tobacco industry accountable starts with exposing their lies and unmasking the damage they've caused.

Learn more about the tobacco industry's impact on the environment at https://www.undo.org.

"The microplastic fibers produced from smoked cigarette filters can cause massive damage to our environment and our bodies," said Eben Schwartz, Marine Debris Program Manager at the California Coastal Commission.