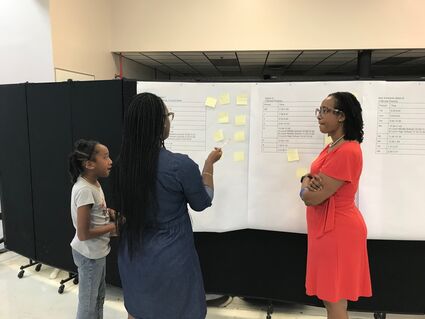 School staff conversed with parents and students to shape the future form of McLaughlin Middle and High Schools.

Quickly advancing plans to co-locate a new high school on the campus of McLaughlin Middle School, administrators brought some 60 parents, students, teachers, and staff together Tuesday to discuss the shape and operation of the school. The school will offer students a second choice of high schools in Lake Wales

The charrette-style event, held in the school cafeteria, was themed around "Phoenix Airlines," using the school's mascot as the flight host. Each attendee was given a ticket assigning them to a starting point on their venture around the six stops on the route. Each asked for input into a different aspect of the future school.

Polk School Board member Sarah Fortney was among those who discussed such wide-ranging topics as the educational focus and dress codes that will be used. Guests were given an opportunity to choose their preferred name for the joint-campus school, or make suggestions of their own. Those offered included McLaughlin Academies of Excellence, McLaughlin School of Excellence, or simply McLaughlin High School. McLaughlin Middle-High School was also suggested by attendees.

One station featured a high-tech "word cloud" feature that allowed attendees to add their descriptions of things that should become the focus of the school or included in the curriculum. Words that were mentioned more often gained in prominence on the display board. Those rising to the top included such terms as "student focused" and "academic excellence."

In keeping with the school's posted sign, McLaughlin administrators led by Debra Wright-Hudson took care at the beginning of the effort to add a high school to the current middle school facility.

Principal Debra Wright-Hudson said that the purpose was to seek community input. "It shouldn't be just what the administration likes," she said.

Plans for the school, expected to host a 9th grade class in the fall, are moving rapidly, according to county staff, and existing plans for a new auditorium and athletic fields. Existing architectural plans will be used to speed the construction, expected to begin by late summer. A new grade will be added each year in anticipation of the school's first graduates in 2026.

School staff are especially excited about the plans, which will allow a "continuity of education" with a familiar group of students.

Site plans are being negotiated with the City of Lake Wales Development Services with an eye to potential access or use for after-hours purposes, according to the city's Public Information Officer Eric Marshall.