Increase of 30 Members in One Year Best in District 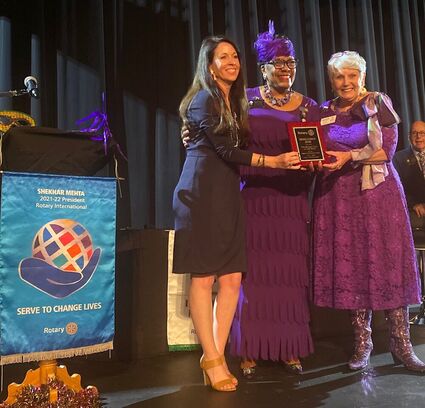 Courtesy Rotary on the Ridge

Rotary on the Ridge President Megan Gillis, left, received the Membership Award from Rotary District 6890 Governor Deborah Williams. Chevon Baccus, right, is the incoming president and a co-founder of the club.

The concept of "community service" is alive and well in Lake Wales, as evidenced by an award presented to one of three local Rotary Clubs this week.

Rotary on the Ridge received a membership award from Rotary District 6890 Governor Deborah Williams after the club doubled its membership in 2021-22, achieving the highest rate of growth among District 6890's 32 clubs. The club, which meets in Lake Wales, grew from 30 to 60 members in the year to end June 30.

Williams presented the membership award June 20 to club President Megan Gillis at the group's annual celebration and installation. Ten new members were installed at the event, held at the Ramon Theatre in Frostproof, where Rotary on the Ridge recently formed a satellite club.

"It has indeed been an amazing year – full of service, business networking, fellowship and new members," Gillis said. "It's not about the numbers, but having more hands and hearts for service. More members means more fun and more opportunities to serve."

Gillis mentioned one of the year's highlights was the club being featured in Rotary Magazine, which reaches a worldwide audience of more than a half million. The article focused on the club being family friendly and having three generations of women as members – Gillis, her mother Sheri Hartley, and oldest daughter, Jillian.

Rotary on the Ridge was chartered by Rotary International in December of 2016, making it one of the district's newer clubs. Instead of just serving one community, Rotary on the Ridge has members and projects spanning from Frostproof to Lake Hamilton throughout East Polk County. District 6890 has about 1,500 members in four counties – Hillsborough, Polk, Hardee and Highlands.

Several district dignitaries were on hand to help present awards. Gillis was awarded a Paul Harris Fellow, while Chevon and Mike Baccus were recognized for becoming benefactors to the Rotary Foundation of Rotary International and for achieving additional levels of the Paul Harris awards. The Baccuses and Terri Miller also were inducted into the Polio Plus Society, pledging annual support until the disease is eradicated worldwide."

The 2020-21 Rotarian of the Year, Laura Lease, presented the 2021-22 award to Fred Halde, who helped with a variety of club projects, including Camp Fearless, the 3V3 Soccer Tournament, Toys for Tots, Mardi Gras and most other club activities. A retired Presbyterian minister who lives in Lake Ashton, Halde also leads the club's opening prayers most weeks, tying the message to a relevant theme or the topic of that night's speaker.

Chevon Baccus presented outgoing district Governor Williams with a special service award and honorary membership in Rotary on the Ridge. 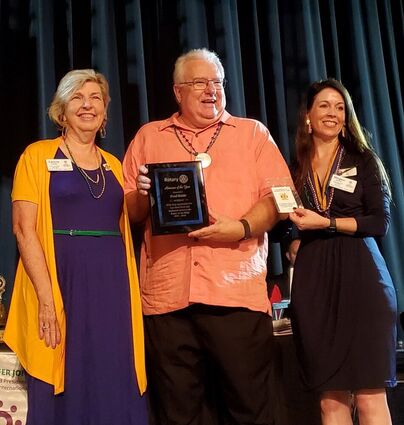 Courtesy Rotary on the Ridge

Rotary on the Ridge welcomes visitors who might be interested in joining the regional, after hours service club. It meets from 5-6 p.m. Mondays at the Ouellette Law Firm community room, 151 E. Central Ave., Lake Wales. For more information email [email protected] or call 863-651-1065.