Another 1,020 Unit Subdivision Planned for South Side of Lake Wales 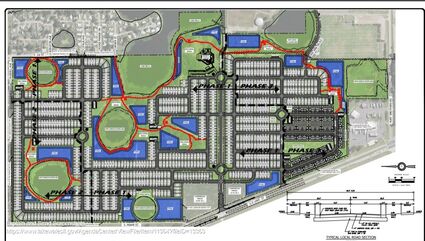 The proposed Ridgecrest development will occupy land once planned to host a golf course community known as Mayfair. It lies east of US 27 and west of Ridge Manor along South First Street. North is to the left in this image. The preliminary design calls for 1,020 residences to be built on the site. Red lines in the image represent a proposed network of paths. Sidewalks will be built on both sides of all streets, according to planning staff, while a shared city/developer project would connect the development to Ray Martin Road. The two would also partner to complete a trail leading to the municipal soccer fields, but it is yet to be determined whether that trail would be paved for bicycles.

A 312-acre parcel expected to host the Mayfair development nearly two decades ago is now the proposed site of a 1,020-unit project dubbed Ridgecrest. The Lake Wales City commission on Tuesday will consider the application for a preliminary subdivision plat and a special exception use permit for a residential Planned Development Project (PDP).

Ridgecrest is planned to be constructed in three phases and will fill in a large blank in the city's residential areas stretching from Russell Avenue and First Street South to US 27. The south end of the parcel will be adjacent to the soccer fields on Hunt Brothers Road. It will also abut Love's Travel Stop, and Ridge Manor, which lies just to the east of the parcel.

The original Mayfair proposal, designed to include a golf course, resulted in the city's sale of the land to an Irish development company. The CRA had purchased the property for development purposes in the 1990's and constructed the Longleaf Business Park, now known as the Lake Wales Commerce and Technology Park, on the western portion of the property.

According to Polk County Property records the property now belongs to Sunshine Agriculture Incorporated. It was purchased by that firm in January 2013 for $1.7 million. Much of the property was replanted in citrus in recent years.

The proposal includes plans for 370 40' lots, 448 50' lots, and 202 townhome units. Frontage along US 27 will be used for commercial purposes both north and south of the development entrance. Other access will be created from First Street South and Russell Avenue. A special agreement attached to the application allows for the cooperative construction of an improved Ray Martin Road connection to Scenic Highway.

According to the agenda presented to the commission at Wednesday's workshop, "the developer will participate in extending an 8'-10' wide city trail along 1st Street South to connect to the soccer fields." That trail will wind along the west side of Lake Belle.

"In the spirit of the Lake Wales Connected plan...we're focused on mobility as a whole here in Lake Wales," City Manager James Slaton told commissioners in explaining the purpose of the trail plan.

According to Senior Planner Autumn Cochella, it has yet to be determined whether any of the trails depicted in the site plan presented to commissioners will be paved to accommodate bicycles. "Right now they are counting toward their open space requirement," she told LakeWalesNews.net, explaining that the plat depicted is "preliminary" and such details will be negotiated before final approval. 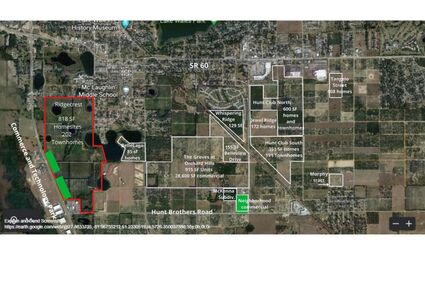 The future land use map of the south side of the City of Lake Wales is rapidly filling, with property owners anxious to gain "entitlements" to city-provided water, sewer, and other services in order to assure that their properties will be developable in the future. Many of the projects approved will likely remain undeveloped for years, depending upon the demand for housing in the area. The project outlined in red at left is Ridgecrest, the newest addition to this changing map.

Internal traffic circulation design within the development includes four traffic roundabouts within a grid pattern looping around the multiple ponds and wetlands within the site.

Addition of the 1,020 residential units will bring the city's anticipated housing list to more than 13,000, with several additional parcels still pending Comprehensive Plan density mapping and zoning. Among those are 102.06 acres of land north of Mountain Lake Cutoff Road and west of US Highway 27 which will be considered for annexation at a second reading public hearing on Tuesday. That parcel abuts the vast Winter Haven Corporation property, lying near Conner Road.

Also pending future development plans are an eight-acre parcel adjacent to Evergreen Road, and approximately 17.23 acres of land south of Waverly Road and west of C F Kinney Road, as well as two parcels of approximately 10 acres each identified as the Murphy and McKenna properties, both on the south side of Lake Wales near Hunt Brothers Road.