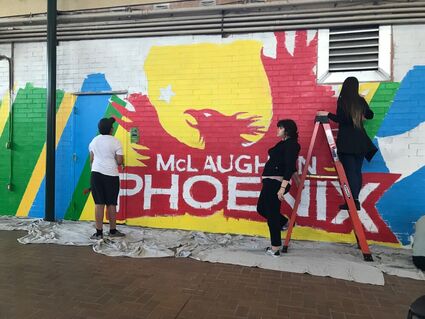 "We Paint Our Path" mural has recently been added to enhance the campus of McLaughlin Middle School in Lake Wales. Student volunteers assisted in completing the mural featuring the school's phoenix mascot.

The growing enthusiasm of staff, students and parents is lending a boost to McLaughlin Middle School as preparations are made to co-locate a high school on the campus. The results are showing up in positive ways.

A new mural entitled "We Paint Our Path," featuring the school's phoenix mascot, was recently dedicated, the result of a week's effort by noted muralist Hamilton Glass. That project was the result of a grant from the Florida Education Association, the teachers' union.

The FEA, Duke Energy, and Miami-based SellersFunding, a financial-technology firm, have all offered support for projects at the school. The grants have added momentum to improvements being made to the campus on South Fourth Street in Lake Wales.

The extra funds are boosting the efforts of Principal Debra Wright-Hudson to move the school from its former D status to become a dynamic education facility for the Lake Wales community.

"Dr. Hudson has the "Wright stuff," said Polk School Board member Sarah Fortney. "It falls back on her DNA," she said, a reference to her family's storied history in local education.

Wright-Hudson is the daughter of revered educator Dr. Clint Wright, who was the first superintendent of Lake Wales Charter Schools from 2004 until his death in 2007. Her mother, Debra, who passed away in 2020, was the area's representative on the Polk County School Board. Her sister, Ashlee, is the founder and CEO of New Beginnings High School in Winter Haven.

In early June the Polk School Board voted to co-locate a new high school on the campus of McLaughlin. The new school will accept a freshman class this year, adding a grade each year until they serve all 12 grades. Plans for new facilities, including an auditorium and athletic fields, are already being finalized. Construction is expected to begin in a matter of weeks.

Grants are part of the success story at McLaughlin. SellersFunding has offered substantial support for the school's Exceptional Students Education program, or ESE, by funding a "farm" that hosts a number of animals and gives students their own garden plots. Among the four-legged creatures occupying the space are burros and an African tortoise, a recent gift from a school bus driver who found the animal abandoned and wandering in a road. 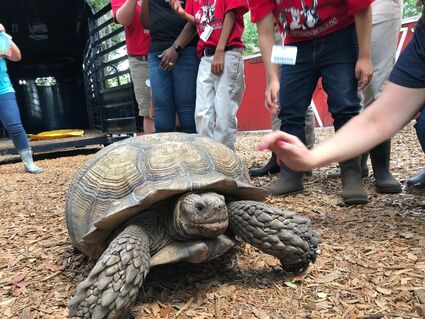 An African giant tortoise is among the menagerie of animals housed in McLaughlin's student-run farm, which has benefitted from a recent grant by fin-tech company SellersFunding.

Duke Energy recently encouraged students to work alongside engineers and executives from Duke Energy to assemble, test and modify solar vehicles in preparation for the “race of a lifetime,” part of their Duke Energy Academy program.

Fortney says that Wright-Hudson and her staff deserves the credit for all the progress at the school. "She is inclusive of all families, all students, and all staff, and when you're inclusive and embrace that, great things are going to happen. I wish I could bottle her and spread her DNA throughout the district."

"Her team is willing to do the work," Fortney added of Wright-Hudson. "This doesn't just happen, there has to be work and intention behind that and the follow-through of her team is impeccable. As McLaughlin's adopted school board member, I am able and willing to dig in and do the work with them."