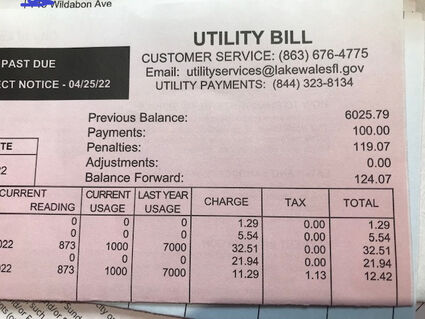 The sight of a $6,000 utility bill came as an unwelcome shock to a Lake Wales resident. The problem resulted from a leaking meter connection.

A struggling Lake Wales man who received a shock $6,025.79 water bill in April is breathing easier now, thanks to the intervention of City Utilities Director Sarah Kirkland.

Wildabon Avenue resident Anthony Caraway, 50, is unemployed due to disabling cancer. He had been billed the astronomical figure, many times his normal monthly usage, which was often as little as a thousand gallons a month, giving him the city's lowest rate.

Money is a serious issue for Caraway, as he is struggling to afford transport to Moffitt Cancer Center in Tampa for treatments. His investigation quickly revealed the problem: heavy trucks using the alleyway behind his home had crushed the water meter connection.

"I went out there and could see a patch of green grass, where everything around it was brown," he told LakeWalesNews.net. "There in the mud you could see the tracks of large tires. All the heavy trucks use that alley, even the city and Duke energy..."

Caraway provided LakeWalesNews.net a video he shot to document the problem, which resulted from water meters having been placed on the right-of-way, across the alley from residents' yards. Water was clearly leaking at the time the video was made. 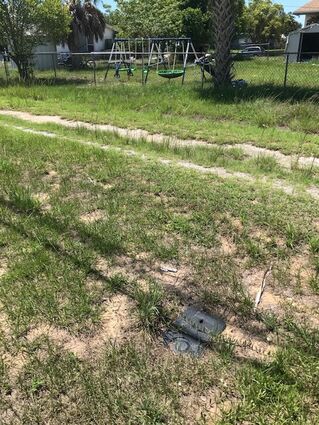 Water was visibly leaking from Caraway's water meter in a video he shared with LakeWalesNews.net. It is one of several placed yards away from resident properties on an alleyway south of Wildabon Avenue in Lake Wales. The alley is used by heavy trucks, including those maintaining the overhead utilities whose shadows are visible in this photo.

LakeWalesNews.net reached out to Kirkland after Caraway's efforts had fallen short. Utility billing clerks had reduced the bill but left penalties applied, meaning that Caraway was unable to clear the past-due balance, and was getting new late charges every month.

"If the break is at the meter, we take responsibility and repair it," Kirkland told the News. "All the fees should have been removed." Kirkland also admitted that the water main had been poorly placed, running along the edge of a former rail line which is now a rails-to-trails project. The alley lies between the meters and the customer's properties.

"We are developing a project to replace all the service in that part of town," Kirkland said, indicating that the questionable placement would be corrected as part of the project.

Caraway, who was born in Lake Wales, indicated that he was very grateful for Kirkland and the LakeWalesNews.net for coming to his rescue, and was near despair over the issue. "Thank you for your help," he said.

Caraway's battle with cancer is being funded in part by a GoFundMe effort that has attracted support from the local community.