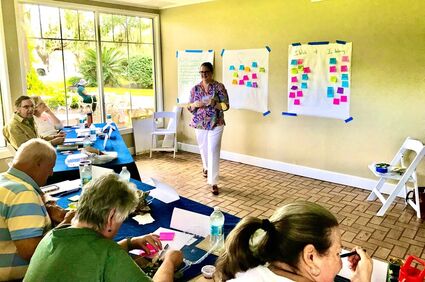 Ambitious plans to beautify and recognize the unique features of the Druid Hills neighborhood on the east side of Lake Wales were advanced during a four-hour conference held Saturday at Bok Tower Gardens.

Among the ideas discussed at the conference was special recognition of the area as the "Historic Olmsted Druid Hills District," including the installation of boundary and historical markers explaining the importance of the area, which would form a portion of an "Olmsted Historic Trail" for bicyclists and pedestrians.

Heritage has already been at work on plans to landscape the Druid Hills streets in accordance with Olmsted's designs and will soon begin to canvass the neighborhood seeking resident input into the ideas being developed.

During the retreat, facilitated by Melissa Tyrone, the board of directors of Lake Wales Heritage shared their ideas and visions regarding the future of Olmsted's designs for the city and agreed that the Druid Hills area deserved special attention.

The curvilinear street grid of the compact area was created by famed landscape architect Frederick Law Olmsted Jr. shortly after he completed the design of Bok Tower Gardens. It lies between 11th and 13th Streets north of SR 60, including Carlton and Bryn Mawr Avenues and Druid Circle.

Edward Bok paid for Olmsted's design work as a gift to the citizens of Lake Wales shortly after the completion of his famous tower. Bok died the following year.

"It's a unique part of the city's history," Heritage President Robert Connors said after the session. "While Olmsted created streetscape designs for almost every street in town in 1929, most of those streets already existed. He created Druid Hills from whole cloth."

Olmsted named the neighborhood and the adjoining Pinehurst subdivision in honor of famous places created by his father in Georgia and North Carolina, respectively.

Among the concepts approved during the session was the creation of an "Olmsted Heritage Park" on vacant city-owned property lying along Druid Circle. Olmsted had set the land aside for that purpose, but his plan was never realized. The idea has already been proposed to city representatives including special projects coordinator Michael Manning, who plans to advance the concept. State recreation grants may be sought to fund the park project.

"We plan to begin knocking on doors Saturday morning," Connors said, adding that "we will also be measuring the positions of existing driveways and other obstacles so that we can build detail into our planting plans."

Heritage has planted scores of trees along city streets since last September, and the non-profit organization has acknowledged that donations are needed to maintain momentum. 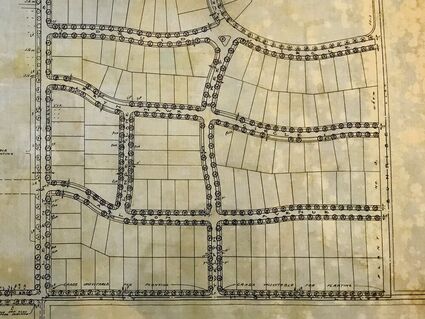 The original design plate for Druid Hills was created by the Olmsted firm circa 1929 to delineate the streets. It included specific locations for each tree to be planted to beautify the neighborhood. That work was never completed. Lake Wales Heritage was created in 2019 to advocate for the completion of the city's original landscape plans created by Frederick Law Olmsted in 1929-30.

The annual visioning and planning sessions are an important part of Lake Wales Heritage's calendar. The "Olmsted Conservancy" group is dedicated to planting or replanting thousands of trees in Lake Wales in support of restoring the original intent of the founders to create a "Garden City." This is the second year the event was held at the Olmsted House at Bok Tower Gardens.

Heritage will also offer residents an opportunity to sponsor individual trees. For more information about the efforts of Lake Wales Heritage, residents are encouraged to visit their website at LakeWalesHeritage.org.