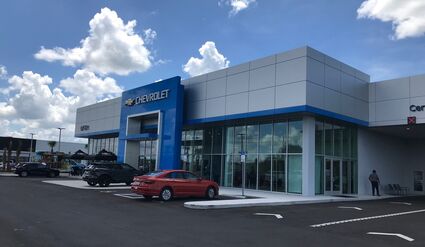 Dyer Chevrolet celebrated the opening of a new $5 million dealership sales and service center on US 27 this week.

More than eighty community and business leaders were in attendance this week as the Dyer family celebrated the grand opening of their second new auto dealership across from the Eagle Ridge Mall on US 27 in Lake Wales.

The ribbon-cutting ceremony at Dyer Chevrolet marked the official dedication of the new 28,000 square-foot facility, which cost more than $5 million to construct. The Chevrolet operations stands adjacent to their recently-constructed Kia dealership.

Guests enjoyed luncheon and dessert buffets before joining the Dyer family in toasts with Italian prosecco. 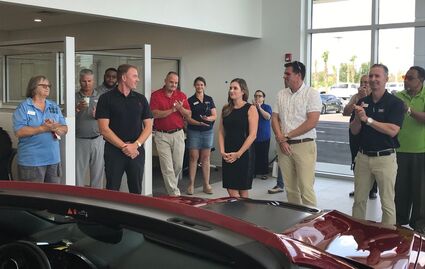 Nearly 100 business and community leaders joined Will Dyer and Tatiana Dyer, center left and right in black, who addressed guests at the ribbon-cutting ceremony Wednesday. General Manager David Dlugokecki, far right, was perhaps the most enthusiastic person on the room.

Speaking at the event, Will Dyer told the crowd that the family was "very excited" when they first got an opportunity to enter the auto business in the fast-growing Lake Wales area. They initially purchased the local Kia dealership before being offered the chance to buy the Chevrolet franchise as well. Each of the dealerships employs about 100, contributing significant payroll to the local economy.

The new building is essentially a mirror-image of the existing Kia facility, since the floor-plans were simply reversed, allowing for a smoother traffic flow between to two adjacent service centers. The adjoining properties will also allow for centralized accounting, and a new detailing center that will service both dealerships, complete with a new free-standing car wash facility in the rear.

The former Chevrolet dealership location on US 27 has been sold, but plans for that facility have not yet been announced.