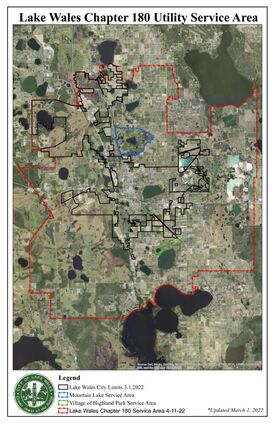 An exclusive "Utility Service Area" expected to encompass all future services that may be provided by the City of Lake Wales encompasses approximately 70 square miles. That area will be eligible for future annexation if utilities are desired.

In a further plan to facilitate the growth of the City of Lake Wales, city commissioners are poised to adopt an exclusive utility service area ordinance intended to keep neighboring municipalities from intruding into city interests.

Citing "the City's municipal home rule powers under Chapter 166, Florida Statutes, and Chapter 180, Florida Statutes," the ordinance will provide a legal basis for defending the city's interests. An intrusion by the city of Winter Haven into the once-agreed service area was cited in discussions by city staff.

Area cities had previously agreed to boundaries that would define their utility interests, but that agreement expired several years ago. Since that time Winter Haven has extended lines into areas that had been demarked as Lake Wales service areas.

The provision of water and sewer utilities is a major factor in driving voluntary annexations by property owners seeking those services, which allow for higher densities of development than would be permitted otherwise.

Selling potable water is generally a profitable business for municipalities, while sanitary sewer services are often not. Most local governments providing those services tie the two together, charging for sewer based upon water consumption, since much of the used water ends up needing treatment.

Lake Wales has annexed several square miles of land surrounding the presently-developed area, approving more than seven thousand new dwelling units in the process. The anticipated development proposal of the private Winter Haven Corporation property, annexed into Lake Wales many years ago, is expected to add another 6,200 units to that total.

The WH Corp. property includes about two square miles west of US 27 north between Mountain Lake Road West and Thompson Nursery Road. In addition to the homes it is expected to host hotels, warehouses, office buildings, and potentially amenities such as schools and a hospital