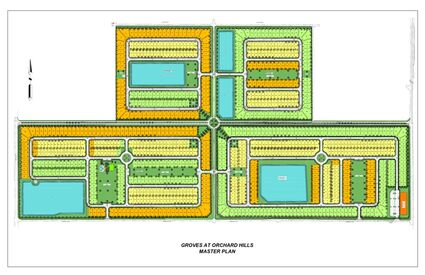 The Groves at Orchard Hills is proposed to fit 907 homes into the 236-acre site. Streets are designed to a rigid grid pattern, raising objections from residents.

On a 3-2 vote, Lake Wales city commissioners almost approved a controversial new subdivision plat that creates 907 new building lots on the near south side before a last minute reversal.

The project, called Orchard Hills, is proposed sprawl across former citrus groves stretching east of Scenic Highway and north of Passion Play Road. The proposal exceeds the city's minimum requirements for open space, primarily due to the stormwater ponds, but was criticized by residents and a non-staff planner due to long straight-away streets and tiny lots.

The developer received a variance to reduce lot sizes from 9,000 square feet to 5,000 square feet, providing for five-foot setbacks, or ten feet between houses.

"There's no place to park cars on these lots," said resident David Price, president of Bok Tower Gardens, who called for a moratorium to allow the city to assess the collective impact of the numerous large developments already approved. "If they come up with a better plan, approve it," Price said. "but not this plan." In the end the commission accepted that position after being informed that this was their final opportunity to affect any changes.

Virtually all the new developments approved in the city during the recent wave of more than a dozen large projects have featured straight grid street patterns, in contrast with the often-cited designs of Frederick Law Olmsted Jr., held as inspiration for the ongoing Lake Wales Connected redevelopment effort. Olmsted promoted "curvilinear" street designs, which slow traffic and create more scenic drives.

Local resident Meagan McLaughlin said that she and her husband had fallen "in love with Lake Wales...it has a unique design esthetic because of the Olmsted influence, and because it was really just a really great plan that was put in place back in 1911." 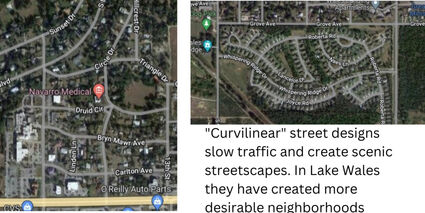 The street designs of noted landscape architect and former Lake Wales landscaper Frederick Law Olmsted Jr., in the Pinehurst and Druid Hills neighborhoods of Lake Wales, left, featured gently-curving streets. That principle was used 20 years ago by former Lake Wales planner Margaret Swanson to induce developers of Whispering Ridge, right, to create a subdivision that remains among the area's most appealing.

McLaughlin, a city planner, objected to the proposed street for the development, which features "blocks that are almost 2,000 feet long with no break. That's going to be a very high-speed street...that's going to be potentially very dangerous if you have kids running in the street."

McLaughlin also pointed out that 45-foot wide lots with two-car garages mean 24-foot wide driveways. "I think the reality of living in this neighborhood is not even what we want citizens of Lake Wales to...it's just my opinion," she said. She recommended that the city have consulting planners Dover Kohl and Partners "that the community laves and trusts" review the design and suggest ways to improve it.

After a motion by Deputy Mayor Robin Gibson, seconded by Commissioner Terre Howell, died on a 3-2 vote, the commission seemed poised to approve the final plat before it was pointed out that the action was irreversible and final. At that point they reversed course and voted unanimously to table the matter and seek improvements to the plan.